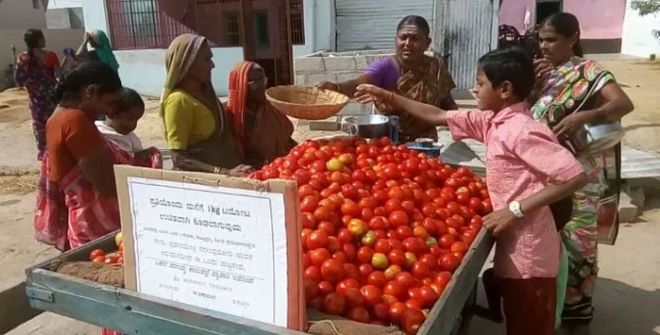 Like thousands of villages in India, Koppal’s Danapur village in Karnataka has many residents who walk mile after mile just to relieve themselves in the open. But, what many villages lack, apart from access to toilets, is a Swachh Warrior as dedicated as Sharanamma Bakar. She is a vegetable vendor who goes door-to-door not to sell vegetables but instead to promote a simple swachh mantra – ‘Toilet Is A Necessity, You Should Have One.’ Not just that, but for every family she meets that already has a toilet, she gives 1 kilo tomatoes for free. What makes this selfless act even more generous is that Sharanamma Bakar is just a poor vegetable vendor who has always struggled to make ends meet.

Sharanamma Bakar has never had it easy. She is a single parent who has raised her daughter without any support from her husband. Today, her daughter is studying law and it is all because of her sheer hard work and dedication. Like many other vegetable vendors she could have just sold vegetables all her life and earned money, but she chose to be different. She wanted to help the nation along with helping herself.

My desh can be made swachh only if each and every household has a toilet. To support and fulfill our Prime Minister Narendra Modi’s mission of a Swachh Bharat, I am giving away one kilogram of tomatoes free to each household that has a toilet. This is my way of supporting this big dream, says the 45 year old vegetable vendor, from Dhanapur village in Koppal District of Karnataka. 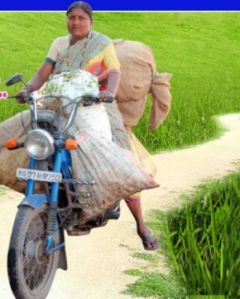 This unusual idea came to Sharanamma when she learnt that around 1,300 families in her village have no access to their own toilet.

Today I have the access to a clean and hygienic toilet, but few years ago, when I had none, I used to go out to defecate in the open. I know, for a fact that defecating in the open is tough, I was unaware and uneducated about the fact that having a toilet is a necessity. I never wanted other people to remain unaware about this and suffer the same fate as mine and that’s why I started my ‘Why have a toilet – A swachh drive, says Sharanamma.

She tries to cover every part of the village in order to pass her swachh message to the masses. Today, she is a ‘Swachh Messiah’ not only for the villagers with toilets but also for those without one. Her swachh efforts in the last two months have led to about 300 families in the village building toilets.

Building Toilet Is One Thing, Using It Real Time Is Another

Teaching and education is one thing, but using the toilets is quite another. Currently, in India, there are many households which have access to toilets but they never use it.

In the past years, the government has built more than 3 Crore toilets under the Swachh India campaign, but reports and studies show that many of them have gone unused. The real problem in India is the mindset and attitude towards sanitation. Sharanamma wants to change this sad reality as well.

Many of the villagers have this attitude that ‘we will go and defecate in the open because that’s what we have been doing for so many years,’ I want to change that. I have started going to households that have toilets to ensure that they are using one properly, added Sharanamma.

Also Read: 5 Women And Their Fight For Sanitation

A Step Towards Getting An Open Defecation Free Status

The district has a little over 50% toilet coverage and is hoping to become Open Defecation Free soon, according to the State Project Director.

In over two and half years since the Swachh Bharat Mission started, around than 1,80,000 villages, 130 districts and three states have been declared Open Defecation Free (ODF) as of April 21, 2017.