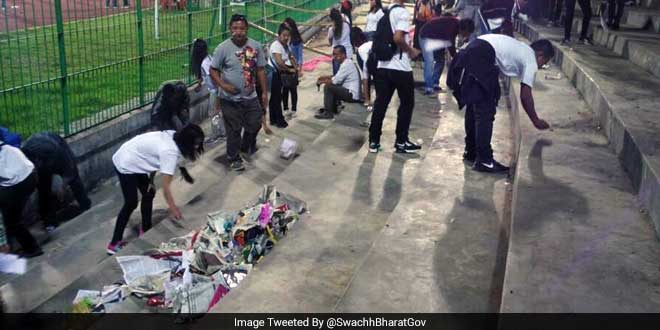 Unsightly stadiums littered with heaps of plastic, food bits and sports memorabilia are generally considered to be a normal fallout of major sporting events. However, in a stadium in Shillong on Sunday, celebrating fans won hearts and took everyone by surprise when they began to clean up all the litter generated by some 23,000 spectators. This mini drive for swachhta took place after Mizoram’s Aizawl FC won the I-League, one of India’s biggest professional men’s football tournaments.

While social media has been busy celebrating the football club’s victory, even more people have lauded the fans’ gesture.

“Thank you Aizwal football fans for cleaning the trash after the match yesterday… speaks volumes of your attitude. We, the rest, should learn from them,” wrote one fan on Facebook, in a post that has gone viral.

Even the Swachh Bharat Mission applauded the move, taking to Twitter to compliment the football fans for setting an example.

Around the world, sporting events pose huge solid waste management problems. Stadiums and arenas bring a high volume of people in one place at one time which means that the sheer volume of garbage generated is very high. For instance, during the Indian Premier League in 2016, a petition filed with the National Green Tribunal had calculated that 40,000 spectators had generated a whopping 10 metric tonnes of waste during the course of a single match.

Priyanka Chopra’s Met Gala Outfit Gets A Thumbs Up From ‘Swachh Bharat’ Fans, Twitter Is Calling It A ‘Victory For PM Modi’