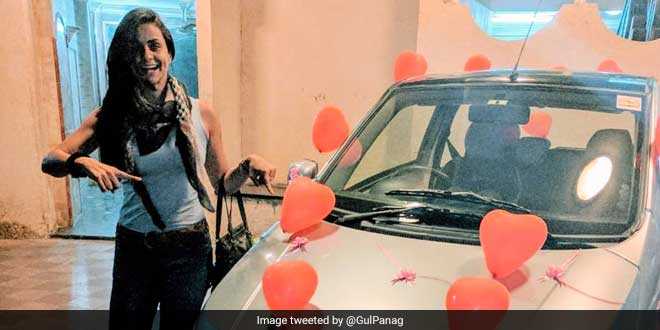 New Delhi: In a country of 1.3 billion people, where every second person on an average is driving one or the other vehicle and contributing to the growing cause of air pollution, actor Gul Panag is doing her bit to cut down on her carbon footprint. To inspire people, the auto enthusiast and adventure junkie once again took to social media to share her proud four-year journey of driving a smart city electric car. Sharing pictures of her Mahindra Electric’s all-electric e2oPlus, the actor said,

Congratulations @mahindraelectric on completing 100 million KMS. Glad to have been part of this electric journey for the last 4 years. 3rd Jan 2015, I bought the E2O. Switching to electric mobility for my daily commute has been a life-changing and addictive experience. Once you go electric, there’s no going back.

This is not the first time the actor has championed the cause of electric vehicles, in an earlier interview with NDTV, Gul Panag had shared her wonderful experience of driving an electric vehicle. She had said,

Ultimately for electric cars, it is a perception battle. We need to start thinking about it. As an individual, we need to weigh the pros and cons and understand the government’s ambitious plan of having 100% e-vehicles by 2030.

The actor also said that we as society thinks EVs require too much of work, or are not safe enough, the answer is – like we charge our mobile phones before stepping out of the house, we need to charge batteries to use an Electric Vehicle. Moreover, any car on road needs to comply with the motor vehicle act stipulated safety norms. It can only be allowed to run on roads once it has passed that test, so electric vehicles are as safe as compared to any other car on the Indian road.

The actor admits that the numbers of charging stations in Mumbai are still scant and says that doesn’t mean people can’t use it for their daily use and can’t help in beating air pollution. She hopes that soon people will switch to a better future and will help save the planet in some way.

Why Electric Vehicles Are Essential For India

Our country is home to one of the largest automobile industries in the world, and the irony is that over 1.2 million deaths occur every year in our country as a result of air pollution, according to a report by Greenpeace. So, the transition to more eco-friendly vehicles is the need of the hour for India.

In last few years, the Government of India has promoted EVs extensively, because they are powered by electricity and not fossil fuels and are 100 per cent emission-free and can help combat the growing problem of air pollution in the country.

The government plan is to deploy around 7 million hybrid and all-electric vehicles in the country by 2020 and make India 100 per cent an electric vehicle driven nation by 2030.