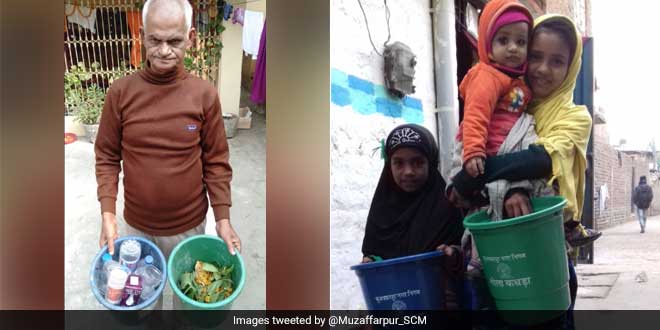 New Delhi: The city of Muzaffarpur is emerging as an example of a clean city in urban Bihar thanks to a joint initiative by Centre for Science and Environment (CSE), the Muzaffarpur Municipal Corporation (MMC) and ITC limited. Under the initiative, ‘Swachhata Swasthya Samridhi,’ which was launched in December 2016, Muzzaffarpur has become the first city in the state to have its own bye-laws on solid waste management. The main aim of the programme is to advocate source segregation through community awareness campaigns.

Awareness plays a vital role in #WasteManagement. Propagation of #PlasticBan in #muzaffarpur to avoid ambiguity among household and commercial establishments. pic.twitter.com/fsMd25OqHE

In two years of the campaign, 70 volunteers have signed up to keep a check on waste collection and educate people on the necessity of waste segregation. Swati Singh Sambyal, Programme Manager CSE, explains,

With the help of volunteers, Mazaffarpur regularly organises mass awareness drives throughout the city, explaining the harmful effects of plastic on the environment.

This audience often includes Urban Local Bodies, volunteers, local NGOs, and other citizens of the city or even other cities who want to learn waste management to keep their city clean

Two years into the programme, Muzaffarpur is now amongst the cleanest cities in Bihar. About 70 volunteers have been working to do door to door propagation to educate residents on segregation of waste into wet, dry and domestic hazardous waste. Muzaffarpur is the first city in Bihar to have its own solid waste management bye-laws and is enforcing the ban on plastic carry bags which was recently announced by the state government,

Household #composting is inbuilt in Indian DNA. Citizens of #muzaffarpur are going back to basics of #WasteManagement #segregation #backyadcomposting pic.twitter.com/7ngaYQOtpw

These efforts are not going to waste as 41 out of the 49 wards in the city are practising waste segregation at source, as of 15th January 2019 and the rest are expected to follow through by February.

"Teach us to #segregate and #muzaffarpur_SCM will be a city with 100% #sourcesegregation and segregated transportation," says the citizens. pic.twitter.com/7SOqcn8X9W

Take Cue People! Actor Gul Panag Celebrates Four Years Of Her Electric Vehicle Journey, Says There Is No Going Back