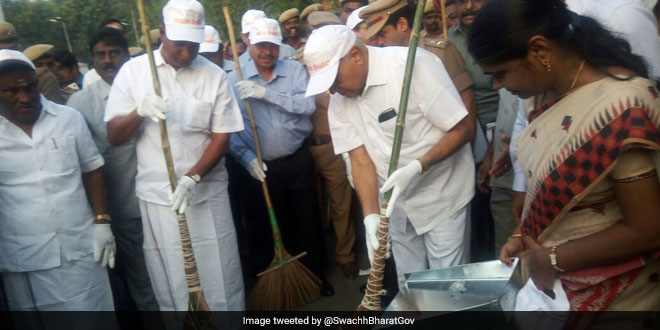 Coimbatore secured a good 16th position in the Swachh Survekshan 2017 rankings in terms of cleanliness among 434 cities surveyed, but is aiming to break in to the top ten this year. Tamil Nadu Governor Banwarilal Purohit took part in a mass cleanup drive on November 15 at Coimbatore. As a part of the Swachh Bharat urban initiative, the governor took up a broom and along with several civic volunteers, cleaned up the Gandhipuram bus stand in Coimbatore.

The event was organised by the Coimbatore Municipal Corporation as a part of a programmme which aimed at sensitising people to become more aware about waste management and cleanliness. The objective of the programme was to ensure that people in larger numbers took to the concepts of waste segregation, using public toilets and not littering on the streets.

During the course of the event, the governor also inspected eight e-toilets installed in the bus stand and some other public toilets nearby. These toilets have been installed by the Coimbatore Municipal Corporation in August this year and since then have been functional, ensuring that people have easy access to toilets. A newly constructed pay and use toilet is also functional in the bus stand, maintained by the civic body. It was also inspected by the governor.

We wanted the honourable governor to be present so that our cleanliness drive in the city gets a boost. The citizens have done well to maintain cleanliness around and we are sure that their efforts will be doubled up so that we can break in into the top ten cleanest cities in India. The governor’s participation in today’s Swachhta Abhiyan will be inspirational to many, said Dr K Vijayakarthikeyan, Municipal Commissioner, Coimbatore.

The governor also visited a residential society nearby, Sunnyside Residency, to inspect the solid waste management system in the apartment complex. Praising the success of the system, the governor acknowledged the efforts of the residents. Interacting with members of NGOs present at the event, Mr Purohit said that a similar model of waste management should be followed across the city to make it completely waste free. During the event, biodegradable bags were handed out to ensure the city’s commitment to reducing usage of plastic bags. Children were also present at the event and the governor interacted with them, exchanging ideas on cleanliness and waste management.

A meeting with the Residents Welfare Association was held by the Coimbatore City Municipal Corporation.

Shri Banwarilal Purohit, Hon'ble Governor of #TamilNadu interacted with young social entrepreneurs and RWAs to motivate them to lend a hand towards a #SwachhBharat. pic.twitter.com/ATKoNHLEeb

Coimbatore has been widely lauded for consistent performance in Swachh Survekshans 2016 and 2017, as the city civic body has maintained daily cleaning and waste management. The civic body has also constructed nearly 40 new public toilets and is confident of breaking in to the top ten by the time Swachh Survekshan 2018 results are announced.

‘From Earth To The Moon’, Alia Bhatt And Varun Dhawan Spread The ‘Say No To Litter’ Message For A Swachh Bharat