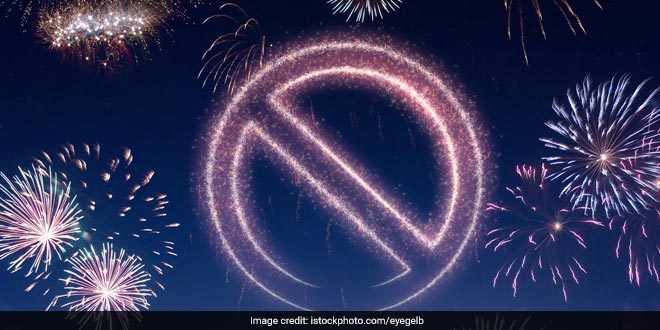 Chennai: Tamil Nadu topped the southern states in the number of cases filed for violation of Supreme Court’s time-limit for bursting of crackers on Diwali day with 2,190 FIRs while none were booked in Karnataka and Andhra Pradesh, police said. In Telangana, police booked over 75 cases in Hyderabad while in the union territory of Puducherry around 30 cases were registered for violating the two-hour window set by the apex court for bursting crackers.

Noise pollution was low in Andhra Pradesh while in Tamil Nadu the air pollution levels dipped across the state on Diwali day, reports from the states said. Tamil Nadu and Puducherry celebrated Diwali on Tuesday while the other southern states on Wednesday.

The festival is not celebrated on a largescale in Kerala compared to other states and crackers are burst mainly during “Vishu”, the Malayalam New Year. Among the state’s 32 districts in Tamil Nadu, Chennai topped the list in violations of the time limit for bursting crackers with 359 cases followed by Coimbatore 184, Villupuram160 and Virudhunagar 134.

Theni recorded the lowest of five cases, police said. However, no arrests were made since the offence was bailable in nature, a police official said in Chennai. The Chennai Corporation Thursday said it removed 95.06tonnes of cracker waste deploying 19,000 civic personnel. The Tamil Nadu pollution control board has said air pollution levels dipped across the state on Diwali day.

Citing data being collated from several parts of the state, an official had Wednesday told PTI that there was a definitive drop in air and noise pollution levels on the day (when compared to previous years) and surveys showed that the parameters conformed to set standards in most regions. A report from Amaravati quoting police said 80 percent of people complied with the apex court directive.

More than booking cases, we stressed on creating awareness among people on the Supreme Court directive. All our Commissioners and SPs conducted a campaign ahead of the festival and that yielded results, a police spokesman said.

Over 80 per cent people followed the apex courts order while there were sporadic cases of violation, he added. State Pollution Control Board Chairman B A S Prasad said reports on air quality across the state post-Diwali were expected in a day or two. “…sound pollution declined significantly as bursting of crackers also fell for a variety of reasons,” he told PTI.

Hyderabad Police Commissioner Anjani Kumar Thursday said over 75 cases had been booked against people who violated the Supreme Court order. The Telangana State Pollution Control Board in a statement said the Particle Matter of size less than 2.5microns (PM 2.5) has increased by 61 per cent and PM 10 rose by 34 per cent on the festival day compared to normal days.

The noise levels increased marginally in residential and sensitive areas while it decreased in industrial areas. The gaseous parameters were within the limits, it said. In Karnataka, though people burst crackers till midnight, police said no cases had been registered.

The Karnataka State Pollution Control Board chairman Lakshman told PTI that the board issued directions to various departments concerned about the implementation of the order. The boards’ teams too ensured that the crackers within the permissible decibel levels were sold. State DGP Neelamani M Raju said by and large the implementation of the court order was “largely successful.”