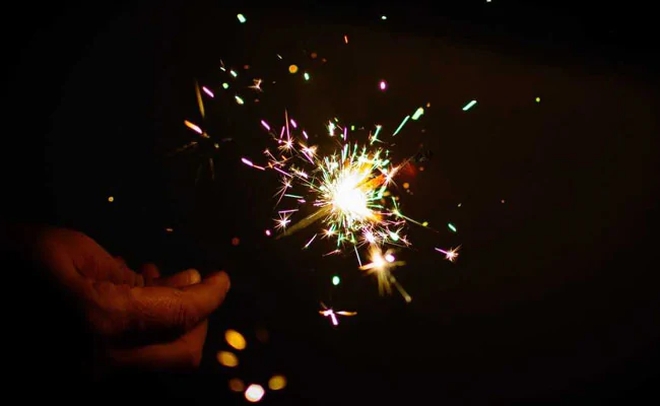 NEW DELHI: Despite the Supreme Courts directives, people in Delhi-NCR on Wednesday continued to burst crackers on Diwali well past the 10 p.m. deadline though the air quality index (AQI) showed a slight improvement over last year. The Supreme Court had limited the time for bursting crackers between 8-10 p.m. on Diwali, but people started bursting crackers soon after sunset around 6 p.m. and continued well after 10 p.m.

Also, the apex court had banned the sale of traditional crackers and allowed only “green crackers” in Delhi-NCR, but there was no clarity as to how many people could procure these, or the ones not containing the polluting barium salts.

Delhi Police spokesman Madhur Verma said data was not immediately available at how many places the police took action against those flouting the Supreme Court directive on Diwali day.

Ravi Sharma, a journalist residing in East Delhi said that he could not find crackers in Delhi for his child but his neighbours did.

“I could not buy even a phuljhadi (sparkler) or anar (fountain) for my child but some of my neighbours have arranged the crackers through some jugaad (improvisation) and they are bursting them now,” Mr Sharma told IANS.

Similar stories came in from other parts of the city such as Mayur Vihar, Dwarka and New Friends Colony.

In Ghaziabad, an IANS correspondent who went around the town was witness to violations in the posh Raj Nagar and Kavi Nagar localities, where almost all district and police officers reside.

Though some firecrackers went off from 5 p.m., the frequency rapidly went up as the sun set.

Speaking on the condition of anonymity, a senior police officer admitted that it was very difficult to implement the Supreme Court order.

The air quality in the national capital and surrounding areas on Wednesday was recorded as “very poor”, a slight improvement from last year’s Diwali night.

The Supreme Court’s strict directive and a moderately high wind speed appeared to be the reason the Air Quality Index (AQI) did not reach the “severe” level.

The AQI at 9 p.m. was 291, according to Central Pollution Control Board (CPCB). Last Diwali, the AQI was recorded at 326.

The System of Air Quality and Weather Forecasting And Research (SAFAR), weather forecasting body under Ministry of Earth Science, said the moisture in the air on Wednesday was normal, thus reducing the air holding capacity.

It warned that the air quality in the region could be bad on Thursday. On Wednesday night it said the key weather parameter was the good wind speed and if it reduces, the levels of PM 2.5 could increase.

The Delhi fire department received 209 calls till 10 p.m though no fatality was reported. The only major incident was that of a fire at a factory in Bawana where 18 fire tenders were pressed into service.

Also Read: Air Pollution In Delhi: Over 3,500 Kilos Of Firecrackers Seized Ahead Of Diwali