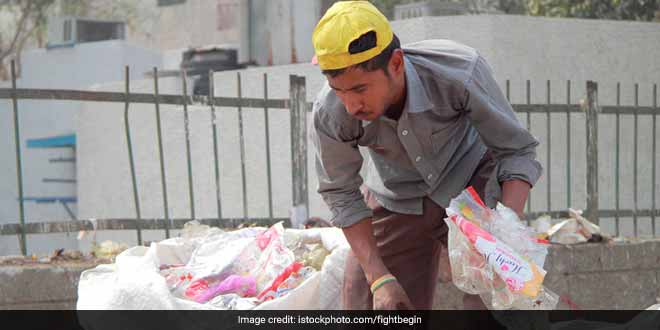 The implementation of the Goods and Services Tax (GST) on July 1 across India has been a major financial highlight of 2017. An indirect tax, GST is applicable throughout India and has replaced multiple cascading taxes levied by the Centre and states. Under the new tax regime, scrap glass has been put under the higher tax window of 18% and has posed a problem for many waste collection workers. The buildup to GST saw several discussions and debates taking place on how it would impact day-to-day expenditure as well as the effect the tax would have on businesses. The decision to levy a 12% GST on sanitary napkins has evoked several responses from all over the country, with many terming it as a negative move against a basic sanitation necessity.

Glass is a key recyclable item as it can be used multiple times when properly recycled. India has a poor collection rate of 45 per cent when it comes to glass recycling. This means that only 45 per cent of India’s glass waste is sent for recycling. The levying of 18% tax on glass waste means that buyers of glass waste will have to shell out more than earlier. While the government has put municipal solid waste under the 0% tax category, taxing recyclable items will serve no purpose as there would be less buyers of waste glass. Under GST, waste cardboard, PET plastic and paper have also been categorised under the 12% tax window.

The impact of levying high tax rates on glass waste will have an adverse effect on waste collectors, who would be on the receiving end of buyers not buying glass waste, or paying meagre amount for it. The waste collection industry in India is a largely informal one, depending on daily labourers who collect and sell scrap to dealers. A June 2015 report by the Federation of Indian Chambers of Commerce and Industry (FICCI),stated that India’s recycling industry employed nearly 1.6 million people. Delhi alone has about 3 to 4 lakh waste collectors, dependent on selling of scrap to sustain their livelihood. Waste collectors do not have fixed wages and their income depends on the amount of waste they sell. With buyers reluctant to buy waste, where will waste collectors sell their waste?

For waste collectors, their only source of income is from the waste they sell. The increased tax rate on glass scrap means that. Even if they do, the rates will come down badly. The government should have taken into consideration the plight of waste collectors when GST was levied on waste, said Saurav Gupta, Chief Executive Officer of the NGO Shuddhi.

Since GST was launched on July 1, the rates have come down for glass waste. Earlier, a discarded glass bottle of 500 ml to 750 ml size would fetch Re 1 per bottle. Since the levying of GST, the rate for glass waste has come down to Re 1 per kilo. The GST impact is visible on other forms of waste as well. Price of cardboard waste has come down to Rs 3 per kg from Rs 5. Price of PET bottles have also fallen by 30 per cent as traders are reluctant to pay for a devaluating material. The formal sector is reluctant to spend more in purchasing waste, resulting in dealers not buying waste from waste collectors, ultimately denting their income. 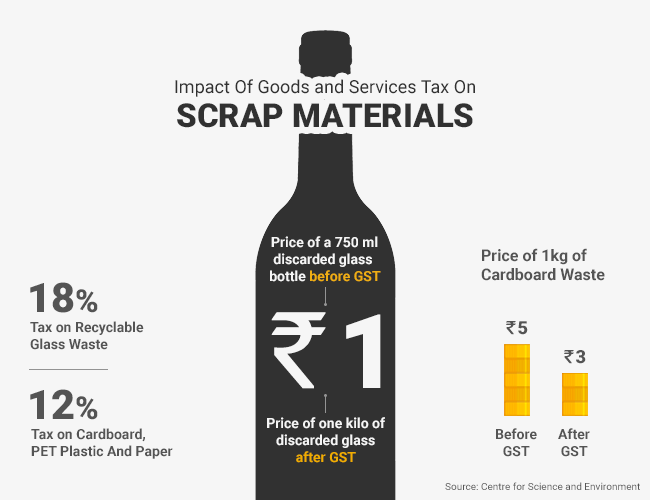 Prices of scrap materials have come down since GST was levied

Women waste workers were already reeling with meagre incomes before GST was levied on waste. Irregular payment of wages by scrap dealers was a regular occurrence earlier. Now, with dealers refusing to buy glass waste altogether, or paying meagre amount, will only make it even more difficult for waste collectors to sustain themselves, said Mr Gupta.

The unintentional impact of GST on glass and other types of waste is likely to worsen in the coming days. The impact will be severe for not only people dependent on the waste collection industry, but on the whole waste management scenario. With recycling likely to take a hit, the waste management aspect of Swachh Bharat Abhiyan will also feel the impact in the long run.