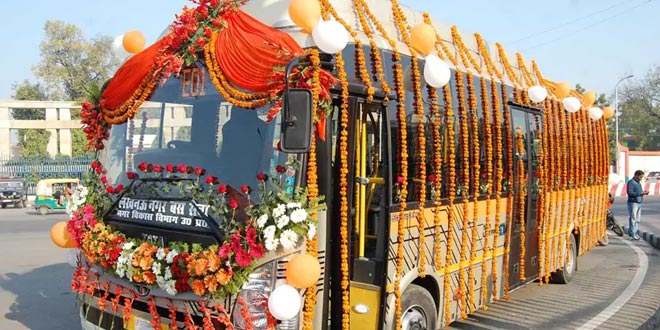 New Delhi: Decorated with marigold flowers, the first electric bus from Alambagh to Gomtinagar in Lucknow awed locals on Sunday as for the first time the passengers experienced the joy of noiseless and pollution less bus ride. 57-year-old Uma Raj Bhatia, who boarded the bus just to experience the journey said, “It felt like a 20-minute plane-ride, it was so smooth and different. For the first time, I could enjoy the journey as there was hardly any engine noise.” 26-year-old Shanti Rai added, “I have been taking this route for the past 10 years and this is the first time I have actually considered this journey as a blessing.”

This was the beginning of the new phase in Uttar Pradesh’s transportation system as the first Ultra 9m AC Electric bus by Tata Motors was flagged off in the city by the Minister of Urban Development, Suresh Kumar Khanna. Over the next four months, Tata Motors will be supplying 40 electric buses to the Lucknow City Transport Services Ltd. (LCTSL) in a phased manner, as a part of its deal to supply 255 electric buses to six STUs (State Transport Undertakings) in the country – Lucknow, Jammu, Kolkata, Indore, Guwahati and Jaipur.

In an official statement released by the company, Tata Motors – Passenger Commercial Vehicles, Product Line Head, Rohit Srivastava said, “The order of providing electric buses is part of the deal of 255 e-buses to be supplied to six STUs in the country, of which LCTSL is one.”

Said to cover 150 km in a single charge, the 31-seater electric bus has been developed with all-new modular facilities. Highlighting the features of the bus Mr Khanna added,

The Ultra 9m AC e-bus uses lithium-ion batteries that have been placed on the rooftop to prevent breakdown due to waterlogging. The batteries are liquid-cooled to maintain the temperature within an optimum range and ensure longer life along with better performance in tropical conditions. We have installed a charging station at the Alambagh depot for fast charging, one charger can charge two buses at a time Moreover, the bus comes with an air suspension for both the front and rear axles, which are intended to make the ride more comfortable.

Also Read: One-Fourth Of The Vehicles To Be Electric In Delhi By 2023, Government Sets Target To Combat Air Pollution

Along with 40 e-busses, Lucknow City Transport Services Limited aims to procure 100 more electric buses by the end of this year and make more charging stations within the city for the easy and effective electric vehicles transportation system.

The plan to bring in the electric buses will also give some relief to the city’s growing air pollution problems. Recently, Lucknow’s air pollution levels raised an alarm when artificial lungs installed in the Lalbagh area near the Nagar Nigam office started to turn black within 24 hours of set-up.

Mayor of Lucknow, Sanyukta Bhatia who was present at the flag off of the electric bus said,

In January, we did an experiment to know the problem of pollution in Lucknow – we installed the artificial lungs in the city. It took only 24 hours for the lungs to change colour here in the city while it took three days in Delhi, and 18 days in Bengaluru. The growing problem of air pollution is worrisome, to curb it, we have decided to switch to electric vehicles on priority. This is just the beginning; soon Lucknow roads will be flooded with electric vehicles.