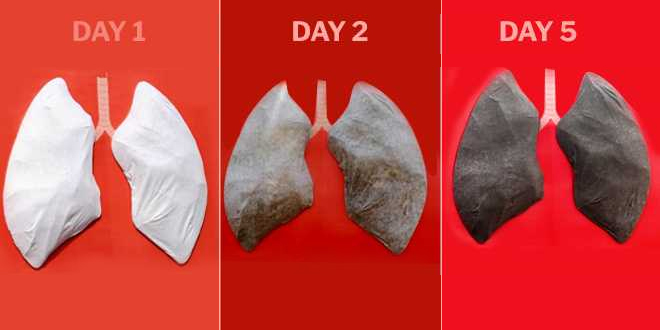 New Delhi: World Health Organisation (WHO) in its Global Ambient Air Quality Database found that 14 of the most polluted cities in the world are in India and out of these 14, Uttar Pradesh accounts for four of the worst performing cities in terms of air pollution – Kanpur, Lucknow, Agra and Varanasi. The state of the poor air quality in India’s most populous state got highlighted yet again this week when environment activists, Doctors For Clean Air, and Climate Agenda installed artificial lungs in the state’s capital Lucknow at Lalbagh area near the Municipal Corporation office. The installation was aimed at highlighting the impact of air pollution on healthy lungs. The installed lungs started getting black within 24 hours and turned completely black in five days’ time, raising serious concerns about the quality of air people breathe in the city.

The lungs installed have HEPA (High-Efficiency Particulate Absorber) filters and exhaust fans fitted in them which suck the air in and make the set-up function almost like real human lungs. Ekta Shekhar, Director of Climate Agenda said,

The lungs have been installed in front of the Municipal Corporation office as it is one of the most footfalls receiving areas in Lucknow so that maximum number of people can witness the colour of the lungs getting changed due to high level of pollution in the air of that area. It took only 24 hours for the lungs to change colour while it took three days in Delhi, and 18 days in Bengaluru.

Last year in November, Delhi citizens’ groups Help Delhi Breathe initiative and Lung Care Foundation along with doctors of Ganga Ram Hospital installed lungs fitted with white HEPA Filters in the hospital compound, as part of awareness building programme. The artificial lungs turned black in three days due to pollution in Delhi. Ms. Shekhar said that the artificial lungs installed in Lucknow will be dismantled on Thursday and the exercise will be repeated in some other cities as well.

Mayor of Lucknow, Sanyukta Bhatia who launched the installation of the artificial lungs said,

This experiment is definitely raising awareness among people of Lucknow on the problem of pollution. The Municipal Corporation has been getting queries regarding measures being taken by it to curb pollution. We have been taking several measures like sprinkling water on dusty roads, planting trees, conducting awareness programmes. We are focusing more on making the roads of Lucknow dust-free. In this direction, we have taken a major step recently. We bought three automatic road-cleaning machines. These machines will clean the roads without generating any dust, will sprinkle water on the area being cleaned and has the capacity to suck garbage, debris and even dead animals.

Dr. Suryakant, Head of the Department of Respiratory Medicine and Pulmonary of King George’s Medical University and Lucknow convenor of Doctors for Clean Air said,

Lucknow is one of the most polluted cities in the world as per WHO and we can witness this right in front of our eyes. People are exposed to high levels of toxic air. There has been an increase in the number of patients visiting hospitals with complaints of respiratory problems in the last three months. Other cities of Uttar Pradesh are also facing the same situation especially Agra, Varanasi and Kanpur. We at Doctors for Clean Air are trying to reach out to as many people as possible to make them aware of the harmful impacts of air pollution.

He further added that the Doctors For Clean Air in collaboration with environmental activists and the civil society of Lucknow will be presenting a memorandum to the State Pollution Control Board of Uttar Pradesh, the Environment Minister and the Chief Minister of Uttar Pradesh demanding that the air pollution norms be strictly implemented in the city. Dr. Suryakant said,

Burning of biofuels for cooking and heating is a big reason for pollution in Lucknow. Most of the houses in slum areas and in villages do not have LPG (Liquefied petroleum gas) connection. We at Doctors For Clean Air make an appeal to the government of Uttar Pradesh to identify such houses that do not have cleaner ways of cooking and connect them with Central government’s Ujjwala Yojana.

Pradhan Mantri Ujjwala Yojana was launched in 2016 by the Ministry of Petroleum & Natural Gas for providing LPG connections to women from Below Poverty Line (BPL) households.

This experiment has been an eye-opener for me and many other people. I think we should not depend only on what the government is doing or can do to curb the pollution. I believe we as citizens must do our bit to battle the problem. It is us, our children after all whose health is being affected. We can start with small acts like planting trees on birthdays and other special occasions, getting our vehicles checked for pollution regularly, and using public transports more.

There are nine air pollution monitoring stations in Lucknow installed by Indian Institute of Toxicology Research (IITR). As per its records, in the last few weeks, the Air Quality Index (AQI) on most days was more than 300 which is considered ‘very poor’. The AQI recorded in Lucknow on Thursday at 1 PM was 397 which is almost touching the ‘extreme’ category. However, experts are of the view that the current methodology of determining the pollution level does not indicate the exact level of pollution due to lack of enough monitoring stations. Experts also say that most monitoring stations only record the levels of Particulate Matters 2.5 and 10 and leave out other extremely toxic pollutants like ozone, sulphur, carbon monoxide, and carbon dioxide. This means that saying that Lucknow’s AQI is ‘very poor’ may be a major understatement. According to experts, there are only 45 air pollution monitoring stations in Uttar Pradesh which is too less a number since it is a big state that has as many as 75 districts and four of most polluted cities in the world.