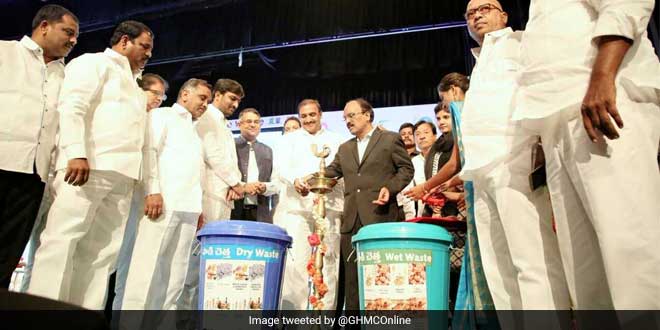 The Swachh Bharat Abhiyan’s urban wing has repeatedly urged urban civic bodies to come forward to address the numerous municipal challenges that exist in India’s urban spaces. While the rural wing of the mission is focusing mostly on construction of toilets and bringing in behavioural change in sanitation habits, the urban part of the mission is also focusing on solid waste management, waste segregation and disposal. The challenges in urban spaces differ, as civic bodies have consistently struggled to tackle with the rising population and shrinking of spaces. Amidst such challenges, the Greater Hyderabad Municipal Corporation (GHMC) is coming up with several solutions to deal with the multiple challenges the civic body faces regularly.

Hyderabad produces a massive 4,500 metric tonnes of garbage every day. The number is huge and without proper management, tackling such a quantity of waste daily would be a near impossible task for the civic body. One of the first steps taken by the GHMC to deal with the waste problem was to popularise the concept of waste segregation. The GHMC took it upon itself to distribute colour coded dustbins to residential societies and conducted several awareness camps to popularise waste segregation among the residents of Hyderabad. More than 100 waste awareness camps have been organised by the GHMC in 2017 alone and each have ended with the distribution of colour coded dustbins. The GHMC estimates that till June 2017, over 1,000 metric tonnes of waste was being segregated daily by the residents, making it easier for the civic body to dispose ofwaste.

Waste segregation has caught up really well with the residents of Hyderabad. The response to all the waste awareness camps has been highly positive and more importantly, people now understand the importance of segregation better than they did earlier, said Janardhan Reddy, Municipal Commissioner, Hyderabad.

The true jewel in Hyderabad’s crown has been the completion of an 11 megawatt waste treatment plant at Ghatkesar, Bibinagar, which will become operational shortly. The plant will have a capacity of treating 1,000 to 1,500 metric tonnes of waste daily. Once the plant becomes operational, a majority of the city’s waste can go into it. The plant will be instrumental in producing energy which the civic body plans to make commercial use of. More importantly, the plant will also recycle waste. The GHMC is already planning to tie up with several commercial establishments who would buy recycled waste from the civic body for future use.

GHMC will also launch over 2,000 Swachh auto tippers (SATs). These will be a fleet of door-to-door garbage collection vehicles which will operate all over Hyderabad and collect waste, transporting it to the newly operation waste management plant.

Hyderabad’s approach towards waste management has been a unique and innovative one, an example for other civic bodies to follow.
What has truly separated the civic body from others is that GHMC has not restricted itself to conducting awareness camps or occasional cleanup drives. The civic body has addressed every possible issue related to waste and its management in the city. One of the many complaints regarding the Swachh Bharat Abhiyan has been the mission’s inability to address the issue of manual scavenging. The illegal act of employing manual scavengers is still claiming lives in 2017. To eradicate the dependence on manual scavengers, the GHMC in collaboration with the state government of Telangana introduced 70 sewer jetting machines which would clean clogged sewage lines without people having to go down into them.

The GHMC has also conducted internal competitions among its wards and residential colonies, on the basis of maintenance of cleanliness, sanitation facilities and waste management. The civic body’s healthy competitions and practice of awarding the deserving winners had instilled a feeling of healthy competitiveness among the wards, prompting them to sustain the practice of cleanliness. GHMC is also roping in schools so that students can participate in regular cleanliness drives every week. Numerous Indian urban metros are trying and struggling with waste management. Hyderabad is setting a truly inspirational example for others to follow them.