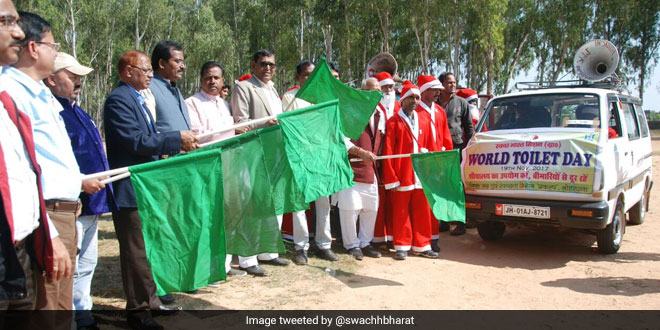 World Toilet Day 2017 saw celebrations across India with government officials, NGOs, volunteer groups and students coming together in many states for awareness activities, rallies, Shramdan to make people realise not only the importance of the Day, but of sanitation in totality.

In Jammu and Kashmir, Chief Minister Mehbooba Mufti launched a signature campaign in the state’s Samba district. Signatures were obtained from district officials of Samba who pledged for an open defecation free (ODF) Samba. Jammu and Kashmir’s sanitation coverage is a poor 37.91 per cent, with only two of the state’s 22 districts being declared  ODF in the last three years. An awareness programme was also held under the supervision of Kumar Rajeev Ranjan, Deputy Commissioner of Jammu, who flagged off a vehicle rally from Satwari to Bhalwal to spread awareness on sanitation.

Chhattisgarh, which plans to become ODF by 2018 witnessed large scale celebrations across several rural districts. In Kondagaon in Chhattisgarh hundreds gathered to take a Swachhta pledge to construct and maintain toilets and say no to open defecation. Dance performances and a play were used to sensitise people about the importance of having a functional toilet at home. In Kanker, the district administration organised a workshop on sustainability of sanitation solutions, and also promoted “Selfie with Toilet,” encouraging residents to click selfies with newly constructed toilets. In Raigarh, children made rangolis of toilets to further spread awareness on sanitation.

Bihar, which is the worst performing state in terms of toilet coverage despite three years of the Abhiyan also utilised the occasion of World Toilet Day well to make people aware of the dire sanitation scenario in the state. Parameswaran Iyer, Secretary, Ministry of Drinking Water and Sanitation, was on a three-day tour of Champaran district to celebrate World Toilet Day. Mr Iyer, along with the district administration launched the newsletter “Swachhta Darpan,”which will notify people about the Swachh Bharat activities and their progress in the state. The District Magistrate of Gopalganj, Rahul Kumar, declared the Basdila gram panchayat and 34 wards of the district ODF on the occasion.

In Uttar Pradesh’s Kanpur, Rajpur block was declared ODF on the occasion of World Toilet Day. To celebrate the declaration, several women from the block participated in a kalash yatra. In Varanasi, the district administration engaged with students of Kerakatpur Primary School to discuss the importance of using toilets, washing hands and maintaining menstrual hygiene. In Rewa, Madhya Pradesh, the focus was on children, who were asked to spread the Swachhta message in the community.

Here is a glimpse of activities undertaken as part of #WorldToiletDay celebrations in various districts of Uttar Pradesh. pic.twitter.com/tAtwKHeQRV

Northeastern states were also at the helm of celebrating World Toilet Day. In Imphal, Manipur, a mass rally was attended by civic volunteers, local celebrities and administrative officials for a clean and healthy environment. In Assam, a cycle rally was organised in Nagaon by the district administration. Placards in the rally highlighted the importance of using toilets and maintaining them. In the district of Barpeta, an awareness meet was arranged by the administration, following which several pits were dug by volunteers and villagers to begin the process of eradicating open defecation from the district.

Thousands of people joined the #WorldToiletDay celebrations in Kohima, Nagaland, where certificates were awarded to best performers & brand ambassadors from various districts. pic.twitter.com/YfIEONcWv9

Down south, several states celebrated World Toilet Day with enthusiasm and vigour. In Andhra Pradesh’s Challapalli district, children from several villages gathered to take the Swachhta pledge. Artwork was displayed to teach people about the ill effects of open defecation and how using toilets can contribute towards a healthy lifestyle. In Khamma, Telangana, the district administration handed over several ODF certificates to village heads who chose the occasion to declare their villages ODF. Bellary in Karnataka saw a cultural event was organised by the district administration. Songs written by local performers were performed by local students, so that the message of an open defecation free district reached the attendees.

The participation of so many states, districts and villages to mark World Toilet Day 2017 cements the fact that the consciousness surrounding safe sanitation is a growing culture in the country. The Swachh Bharat Abhiyan, along with efforts of administrative officials, NGOs and civic volunteers has resulted in sanitation become a primary priority of improvement for many. A lot of ground remains to be covered, as a WaterAid report released on the eve of World Toilet Day said that 73 crore Indians continue to lack access to basic sanitation facilities. It can be hoped that the celebrations witnessed nationwide on World Toilet Day and will translate to the scenario towards more and more people getting access to safe sanitation facilities.

Fighting Air Pollution: Here Is What Delhi Can Learn From Mexico City, Once The World’s Most Polluted City

“I Am Sorry, I Give Up. Forgive Me My Ocean,” Says Afroz Shah As He Suspends Versova Beach Cleanup After 109 Weeks