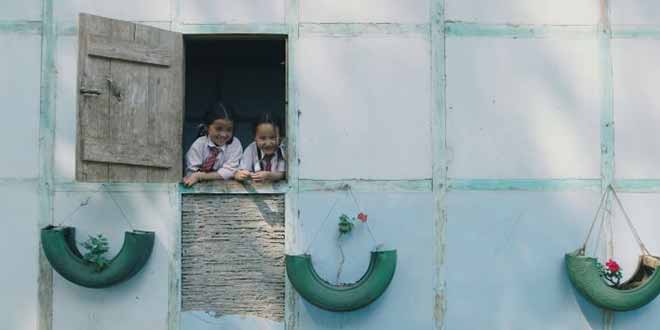 How often do we hear the saying ‘nothing goes to waste?’ Quite often, in inspirational self-help videos or after putting in considerable effort that didn’t yield the expected result. Sadly, the adage doesn’t apply to waste disposal in India. In fact, when it comes to garbage everything goes to waste here. After nearly 70 years of independence, the waste management remains grim – garbage dumps, overflowing landfills and casually discarded plastic bottle are posing considerable challenges. The nationwide cleanliness mission of Swachh Bharat Abhiyan aims to transform and raise consciousness of the countrymen in sensibly dealing with waste. And this is a practice where everyone can learn from everyone, irrespective of the age, class or gender barrier. In the serene hills of West Sikkim, the students of Lingchom Government Secondary School are recycling waste, reusing it and setting an example for their elders and rest of India to follow.

Sikkim has always stood for cleanliness and sensitisation on sanitation. The practice of open defecation was eradicated in the state long before Swachh Bharat Abhiyan was launched. In 2002, the state had banned disposable plastic carry bags. But increase in the global usage of plastic is a difficult practice to keep at bay and the inevitable entry of PET bottles in Sikkim was a matter of time. For the students of Lingchom Secondary School, the sight of scattered plastic bottles was an eyesore, given how traditionally Sikkim has been a clean state. With the increasing instances of plastic waste in adjoining areas of Gyalshing, where the school is situated, the school along with its students decided to do something about it. Under the supervision of Head Master Rajesh Kumar Thapa, the school adopted a waste recycling programme with active participation of the students, since 2011.

Under the school’s initiatives, waste collection is given high priority. Teams of students have been formed and specific areas allotted to team. The teams then go their allotted area and either through door-to-door-collection or by searching through garbage, look for plastic bottles, cardboard waste and any discarded item which could be of potential use. The villages near the school are all covered by student teams, who visit them twice, sometimes more, a week. Trash collected from the villages is brought to the school, where students employ innovative approaches to make usable things out of them.

Waste is a problem none of us can ignore and neither can its increasing presence be ignored. Rather than waiting for anyone else to do anything, the school students decided to bring waste themselves and reuse it for various purposes, said Sajen V Sebastian, Member Secretary, Lingchom Government Secondary School.

The school propagated the idea that collection of waste, recycling it and reusing should be a fun activity for students and not something serious and somber. Post school hours, teachers and students come together to make new things out of the waste collected. Teachers download tutorial videos from the internet to guideand motivate children on the numerous useful products that can manufactured from waste. Gradually, the students also learned to innovate on their own, coming up with great results. The students have been instrumental in creating plastic pots for plants, wall hangings, stationery stands, pots from discarded tyres and many such day-to-day useful items.

The effort to make something out of waste has been collective, with students and teachers participating together. We continuously motivate our students to come up with something new and till now, they haven’t disappointed us, said Mr Sebastian.

Every year, the school organises for a sale-cum-display event, which showcases the various products made by the students. The waste management project had begun keeping in mind the necessity to sensitise children, but has now spread its wings far beyond. Children from the school learn about the importance of recycling and reusing and take back the message to their homes. The school children have also been instrumental in spreading the message of waste segregation at homes, and how biodegradable and non-biodegradable waste should be dealt with. The practice has proven to be successful as many homes have stopped disposing waste casually. Instead, they are following in the footsteps of their children and reusing waste to make flower pots, mats etc.

Students go to adjoining villages to collected waste from residents

The true success of the campaign has been how far the message has spread. We are glad that the practice of segregating waste and reusing it is no longer restricted to just our school. The students’ parents are also participating in the campaign. This shows that our campaign has achieved true, all round success, said Rajesh Kumar Thapa, Head Master of the school.

Lingchom School’s students have truly achieved what the whole waste management aspect of the Swachh Bharat Abhiyan is trying to. They have demonstrated that they are sensible about handling waste and adept at reusing it usefully. As the Swachh Bharat Abhiyan gains momentum in its third year, Lingchom’s students will be great examples of inspiration for schools looking to inculcate similar values in their students.