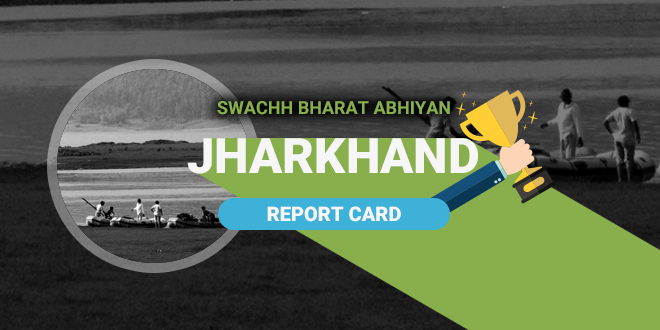 New Delhi: 65-year old Jodha Bai has lived all her life in Bagrai village in Ramgarh district, Jharkhand. For as long as she can remember, everyone in her family and around her has defecated in the open. Unaware about toilets or the dangers of not using one, defecating in the open was the most natural thing to do. But today Jodha Bai is a vocal advocate of building toilets and converting skeptics to start using toilets. Jodha is part of a strong all women self-help group, many of which are playing a critical role in Jharkhand’s bid to achieve the Swachh Bharat Abhiyan of 100% sanitation. Together they have managed to get 3,200 number of people to build over 1,800 toilets in their village. For a state that had a dismal levels of sanitation with mere 30.08 per cent toilet coverage in 2014, the effort of these women self-groups is playing a vital role. When the Swachh Bharat Abhiyan was launched on October 2, 2014, the open defecation numbers in certain states posed a bigger challenge for the Union government than some others. Jharkhand traditionally has been one of the problematic states where open defecation was rampant, number of toilets low and awareness about safe sanitation practices even lower. In 2014, 80 per cent of rural households in Jharkhand had no access to toilets. With an annual toilet building rate of 10 per cent, the state had one of the lowest toilet building rates between 2001 and 2011. In three years of the Swachh Bharat Abhiyan, the state’s sanitation coverage has improved to 59.13 per cent, undoubtedly a huge improvement for a state where sanitation coverage languished in the low numbers till 2014.

However, the state has a long way to go to achieve the open defecation free tag (ODF) and continues to be plagued by problems of district administrations not being able to implement toilet building programmes on a scale or speed that the state would like. Over 15 lakh (15,54,893) toilets have been built in Jharkhand’s villages since the beginning of the Swachh Bharat Abhiyan, with the districts of Ramgarh and Lohardaga being the only two districts in the state with ODF status. In terms of number of villages that have gone ODF, Jharkhand lags behind badly, with only 8,293 of its 32,623 villages being attaining the ODF status. 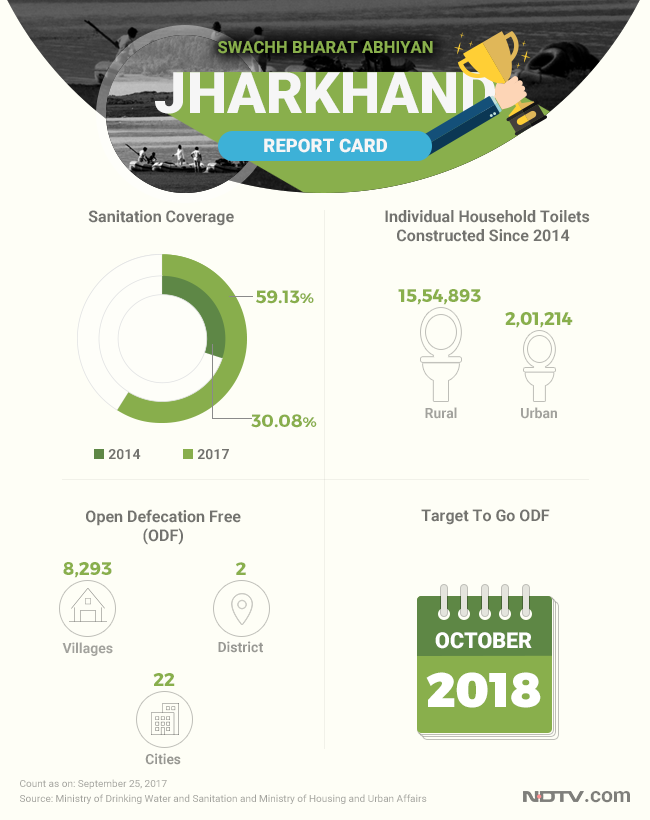 Despite the construction of toilets being more challenging in urban areas due to space constraints and lesser government grant (the Swachh Bharat Mission gives Rs 4,000 for construction of toilets in urban areas compared to Rs 12,000 in rural areas), urban Jharkhand has fared better in addressing the issue of sanitation and has sanitation coverage of over 65 per cent. The state’s urban local bodies (ULBs) have together constructed over 2 lakh (2,01,214) individual household toilets across major cities, along with constructing 1,527 public toilet seats and 1,211 community toilet seats. Five of Jharkhand’s 44 ULBs have attained the ODF status and the remaining have sanitation coverage of above 75 per cent and are slated to go ODF by the end of this year.

From the beginning of the Swachh Bharat Mission, the urban local bodies have been instrumental in identifying households which had no toilets and assisted in the construction of toilets. They have also been active in increasing the number of seats in public toilets so that people who do not have enough space at home can use public toilets with convenience, said Pranav Kumar Paul, Assistant Director, Swachh Bharat Urban, Jharkhand.

There are quite a few bright spots in Jharkhand’s Swachh story. Apart from continuous involvement of local bodies and women led self-help groups who are aware of the sanitation problems and are working with local administrations, Ramgarh was Jharkhand’s first district to go ODF in April 2017 and was congratulated by UNICEF India for its achievement, a major one for the district where only 15 per cent of the households had toilets till 2015. Then there are Swachh crusaders like 12-year-old Monidrita Chatterjee from Jamshedpur, who saved her pocket money since 2014 to build a toilet for underprivileged girls in Jharkhand’s Kendradhi village. Monidrita and her parents have built six toilets in different parts of Jamshedpur and have been keenly working on building toilets using plastic bottles, to tackle the problem of lack of toilets and disposal of plastic waste.

Jharkhand will needs many more such success stories to achieve the target of building 30 lakh rural toilets. Jharkhand Chief Minister Raghubar Das in 2016 declared that the state planned to achieve the completely ODF status by December 2018, 10 months before the national deadline. For this deadline to eradicate open defecation to be met, collaboration between local administrations and communities will be the key.

Watch: “We are determined to clean up Jharkhand and make it open-defecation free by 2018”, says Raghubar Das, Chief Minister of Jharkhand

Rajasthan’s Performance Has Been Impressive, But Allegations Of Coercion May Hamper The State’s Image