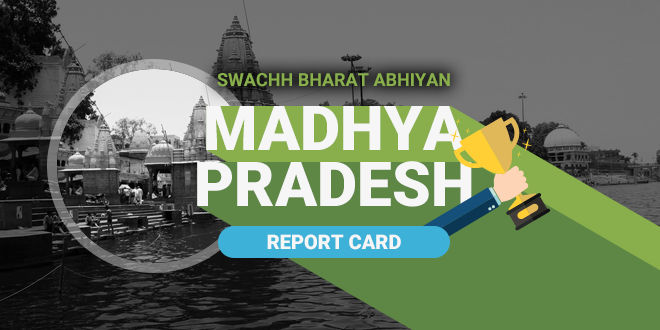 Eight cities of Madhya Pradesh were among top 25 clean cities as per Swachh Survekshan 2017, Indore being declared as India’s cleanest city in terms of overall sanitation coverage and capital Bhopal coming in at number 2. As the state was celebrating Indore’s ambitious feat, people in about 48 districts of the state were still defecating in open. As per the latest statistics given by the State Programme Officer, Swachh Bharat Mission-Gramin (SBM-G), Dr Atul Srivastav, only 11 districts out of 51 have been declared open defecation free (ODF). Ever since the launch of Swachh Bharat Abhiyan, the rural sector has been lagging behind and this is evident from the fact that its first district (Indore) was declared ODF only in 2016.

Nearly 72% of the state population resides in the rural areas and hence the burden on the SBM-G is too high. The entire activity of ODF is people oriented and only when each and every villager is using the toilet can the process be termed as successful. Only after a complete behaviour change has been implemented, we build toilets. We have divided the task in phases and it is only when we successfully finish the first phase, we execute the next one and hence the process is going in a slow pace, Dr Srivastav tells NDTV.

Since 2014, over 45 lakhs latrines have been constructed in 11 districts and the SBM-G plans to construct another 25 lakh toilets in next two years. The rural area of the state aims to go ODF by October 2019. Districts like Bhopal, Indore, Harda, Sehore, Narsinghpur and Shajapur have not only turned ODF but also have 100 per cent Individual Household Latrine (IHHL) coverage as per the portal of Drinking Water and Sanitation Ministry. 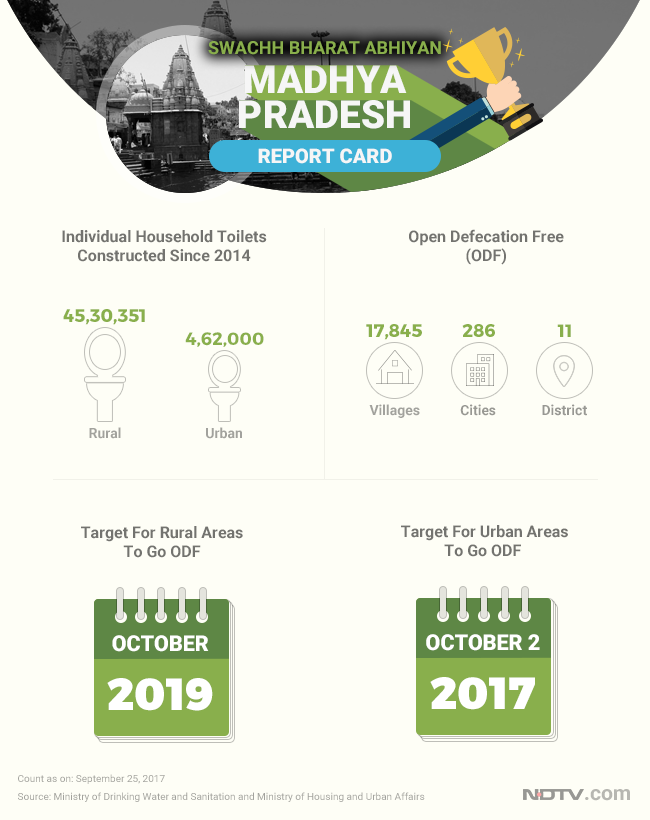 Since July 2016, the toilet building activity has been at its peak in the rural sector as the SBM-G received more than 20 lakh application for IHHL says Dr Srivastav. The high number was recorded after several district officials introduced innovative and fun steps to eradicate open defecation.

For instance, in Harda district which was among the first districts to go ODF (August 2016), had introduced the ‘Bhai No 1’ contest where brothers were rewarded for gifting toilets to their sisters. This noble gesture even got an appreciation from Prime Minister Narendra Modi in his monthly radio address Mann Ki Baat, “Government officials of Harda have initiated a unique campaign ‘Brother No. 1’, which says a brother who builds toilet as a Rakshabandhan gift for his sister is the best. I congratulate officials for this effort.”

As a monitoring strategy, sometimes stricter initiatives were taken up like a woman Sarpanch and her committee from Betul district identified the people who defecated in open and live streamed their names in a local channel. Or Education officers from the Unchehra Block in Satna village clicked pictures of people defecating in open and submitted them to the SBM-G officials who then took strict action against them.

In the Raisen district, 13 villages were fined Rs. 4 lakh after it was found that people defecated in open despite having toilets at home. Two school teachers from Budera village of Ashoknagar were suspended on September 12 for violating the government’s ambitious Swachh Bharat Mission by going for open defecation despite having a toilet at their homes.

When it came to citizen’s contribution, Bhuteda village of Ratlam was in news after a local barber pledged to not give a haircut to anyone from a household that does not have a toilet. And a vendor from the same village stopped selling vegetables to people with no toilets.

Districts like Singrauli, Morena, Sheopur, Sagar and Ashoknagar are the worst performers in rural Madhya Pradesh with Singrauli having just 35.75 per cent IHHL coverage. In districts like these the government has directed the local officials to ensure local participation by training a few local residents on health and hygiene. The onus of ensuring that people who have toilets at home do not defecate in open is now on this force.

Of the total 378 urban local bodies (ULBs), 288 have achieved the ODF mark said an official from Swachh Bharat Mission-Urban (SBM-U). So far around 4,62,000 toilets have been constructed since 2014 and about 80,000 toilets are currently in the construction process. Major cities like Jabalpur, Omkareshwar, Ujjain, Chhatarpur, Ratlam, Gwalior, Indore and Bhopal have turned ODF.

While it was comparatively easy to eliminate open defection in most of the cities, Jabalpur was a tough one as the toilet gap was high as 45,000 families who had no access to toilets. One of the prime reason was that most of the families belonged to the above poverty line and hence weren’t beneficiaries of the toilet subsidy. As a result very less interest was shown by the citizens. From making announcements on radio, organising rallies to taking help from women and aanganwadi workers, the Jalbarpur Municipal Corporation tried every strategy and made the city ODF.

Under the ‘Roko Toko’ initiative many cities like Indore, Bhopal and Jabaldur made children major stakeholders in preventing open defecation. Also known as ‘dibba gangs’, school children were given caps and whistles by the civic body and were asked to blow it whenever they spotted anyone defecting in open.

An official from SBM-U said the swift progress of ODF is due to the “flexible strategy” adopted by them. As per the strategy, people were given two options – either to make toilet on their own or take help from NGOs and organisations appointed by the SBM-U. “The application for toilet subsidy is a tedious task and hence people give it a skip and prefer not having a toilet. Hence we appointed organisations that would help people in application and construction process.”

Like the rural areas, behaviour change was a major roadblock in urban areas as well, Most of the families are joint families and the number of people living under one roof becomes higher. Hence having just one toilet isn’t enough. In such cases we came across people who defecated in open thereby defeating the whole ODF process. So, after our analysis we decided to build more community toilets in areas that were vulnerable to open defecation and curbed it completely, explains the SBM official.

Urban Haryana To Join Its Rural Counterpart, Will Declare Its Areas Open Defecation Free By October 2