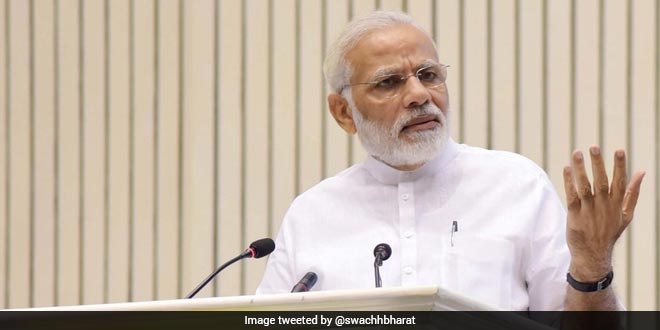 To fulfill Mahatma Gandhi’s dream of a ‘Clean India’, the centre launched its ambitious project Swachh Bharat Abhiyan on October 2, 2014. Three years later, six states, 214 districts and more than 2 and half lakh villages have achieved 100 per cent sanitation thereby attaining the title of open defecation free. On third anniversary of the Swachh Bharat Abhiyan and as a tribute to Mahatma Gandhi’s vision of India, Prime Minister Narendra Modi today highlighted the achievements of the Clean India campaign.  From underlining the role of women and children in the swachhta campaign, quoting a UNICEF sanitation report to labelling the Swachh Bharat Abhiyan as people’s movement, Prime Minister Narendra Modi spoke about several issues in his speech at Vigyan Bhavan in New Delhi:

During the Rashtriya Swachhta Diwas celebrations, the Prime Minister gave out awards to the young guns who participated in painting and essay writing competitions organised as part of the Swachhata Hi Seva campaign. Awards were also given to the citizens who came up with innovative ways to manage waste.

Cleanathon 2017: The Boy From Sherwood College Does It Again, Impresses Amitabh Bachchan With His Swachhta Poem