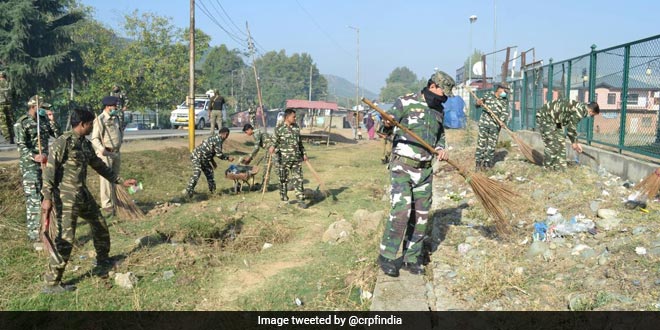 Srinagar: Several events were held across Kashmir Valley as part of the central government’s ‘Swachhata Hi Seva’ campaign, which was organised to create an environment of cleanliness in the country. The police, the Central Reserve Police Force (CRPF) and the Army held separate events across the Valley.

“The cleanliness drive by the Jammu and Kashmir Police, which started on September 15, 2017, at the national-level under the slogan ‘Swachhata Hi Seva’, concluded today,” a police spokesman said.

He said the main objective of this drive was to contribute to Mahatma Gandhi’s dream of clean India.

Prime Minister Narendra Modi had called upon the nation to begin a campaign, ‘Swachhata Hi Seva‘, from September 15 to October 2, the birth anniversary of Mahatma Gandhi.

This drive was today conducted in every district of the Valley, in which all the officers and officials participated and cleaned their premises and adjacent areas with commitment and devotion, the spokesman said.

He said the drive was held in Anantnag, Ganderbal, Shopian, Budgam, Bandipora, Kulgam and other districts of the Valley.

Under the ‘Swachh Bharat Mission‘, all the CRPF battalions of Srinagar sector participated actively, a spokesman of the force said.

The two-week drive laid special emphasis on the cleanliness and beautification of the camps and the surrounding areas.

On the last day of the campaign, the Srinagar Sector CRPF carried out a special cleanliness drive along the Dal Lake on the Boulevard and the Shankaracharya Hill, the spokesman said.

In this drive, 500 officers and jawans from all the units of the sector participated.

The Army held an event at Gulmarg tourist resort which was presided over by Maj Gen R P Kalita.

Major General Kalita launched the ‘Ex-servicemen Cleanliness Force, an initiative in which the retired soldiers would spearhead the cleanliness drive of the areas around Gulmarg.

As part of the campaign, dustbins were presented to the local Market Committee of Gulmarg and a number of display boards to spread the awareness about cleanliness were also distributed, an Army official said.

A display showcased the posters and paintings prepared by the students as part of the campaign, various cleanliness initiatives undertaken by the Army in the entire Kashmir Valley, along with stalls of HAWS, Gulmarg Development Authority and Tourism Department, he added.