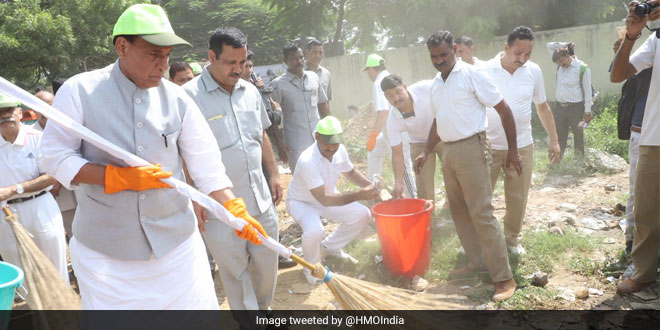 I pledge to contribute my time towards Swachh Bharat Abhiyan, every year I will devote 100 hours towards swachhta, that means, every week I will do 2 hours of Shramdaan. Will make sure that I take this Swachhata Sankalp to Swachh Siddhi (From pledging to attaining cleanliness), says Rajnath Singh.

During the launch Rajnath Singh added that the whole country is expected to go open defecation free by October, 2019, and said, “The government is confident of fulfilling Prime Minister’s dream of a Swachh india. Let us together pledge towards a clean India and make PM Modi’s dream a reality.”

Participated in 'Shramdaan' activity with @ITBP_official jawans under Swachhta Hi Sewa Mission. Let us together pledge towards a clean India pic.twitter.com/ue3Retznaq

Highlighting government’s mega plan of Swachh Bharat Abhiyan, the home minister added that for cleanliness, the central government has implemented a Rs 12,000-crore action plan through 76 ministries and departments. Currently, the government is working on technologies to create wealth from waste.

We will provide toilet facility at home will ensure safety and dignity of women. Swachhata Hi Sewa campaign will help improve nutrition and productivity of our children. Till now we have constructed about 4.60 lakh toilets in individual households and 4 lakh in schools. The figures will continue to rise, added Rajnath Singh.

The government aims to meet the target of Clean India by 2019 by constructing around 11 crore toilets out of which more than 4 crore toilets have been built till August 2017.