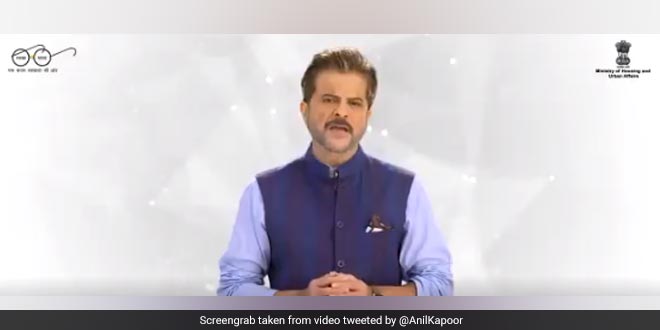 New Delhi: To give a boost to India’s largest cleanliness survey – Swachh Survekshan 2018, which for the first time will cover all the 4,041 towns in the country, Anil Kapoor is urging his fellow countrymen to start treating their own waste by following a simple thumb rule of waste segregation. He says, ‘I appeal each one of us, whosoever is generating more than 100 kilograms of waste, treat the waste yourself. It is your duty to segregate it and treat it effectively.”

Throw away your wet and dry waste in different bins. Give the dry waste for recycling and utilise the compost which can be made via wet waste within your premises. Doing this your earnings will increase, it is important for our #SwachhIndia.

Sharing this video message on Twitter, Anil Kapoor said, “Glad to be a part of this global initiative. We all should come together for a Swachh and Better India.”

Last year in October, the actor had initiated a cleanliness drive in the locality he grew up in, Chembur in Mumbai. Apart from the cleanliness drive, he also interacted with the the residents to explain the importance of keeping their surroundings clean.

Anil Kapoor was also among one of the few actors from Bollywood who was invited by Prime Minister Narendra Modi to join his Swachhata Hi Seva campaign to mark the three year anniversary of Swachh Bharat Abhiyan on October 2. The actor accepted PM Modi’s invitation and said, “Thank you PM @narendramodi ji for your invitation to be a part of the noble initiative #SwachhataHiSeva! I am honoured & will do my best!”

Sonam Kapoor Inaugurates Mumbai’s First All-Women Toilet That Has Been Constructed By Former Norwegian Prison Inmates, Says It Is A Step To Safe Sanitation