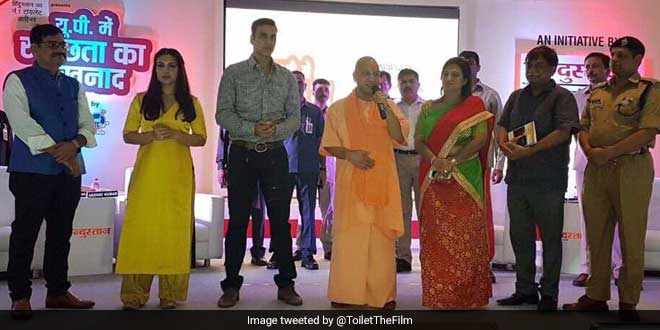 The initiative to clean up Uttar Pradesh under the Swachh Bharat Abhiyan received a Bollywood boost on August 4, 2017 when actor Akshay Kumar joined the state’s Chief Minister Yogi Adityanath to launch a cleanliness drive in Lucknow. The actor, who had arrived at Lucknow earlier in the day to promote his upcoming release Toilet – Ek Prem Katha, along with his co-star Bhumi Pednekar, joined the Chief Minister for the cleanliness drive. The event was held at Millennium School in Lucknow.

The actors, along with the Chief Minister took a Swachhta pledge to adhere to cleanliness norms and maintain it. During the course of the event, Akshay Kumar and Bhumi Pednekar joined the Chief Minister with brooms in hand and engaged in sweeping the premises of the school. The duo were joined by several school children, whose enthusiasm knew no bounds when the saw the actor sweeping with a broom in his hand. The Uttar Pradesh Chief Minister also used the occasion to announce Akshay Kumar as the Swachhta ambassador of the state. It was also announced that the film would be made tax-free in Uttar Pradesh. Yogi Adityanath reiterated the importance of the film which is made on such a social issue and requested his officials to watch the film.

Uttar Pradesh’s performance in cleanliness and on sanitation fronts has been very low, and has been one of the key challenges for the state government. 50 cities from the state featured in the bottom 100 list in Swachh Survekshan 2017, an annual ranking of cities, released by the Ministry of Urban Development in May 2017. The state’s sanitation coverage has also been poor at 47.80 per cent despite nearly three years of the Swachh Bharat Abhiyan. Yogi Adityanath has focused on improving the state’s sanitation coverage since becoming the state’s Chief Minister. The UP CM has set an ambitious target of October 2018 to make the state open defecation free (ODF).

The occasion also saw the launch of a new song from the film, titled ‘Toilet Ka Jugaad.’ Sung by Akshay Kumar himself. The satirical song poses some hard hitting questions like how we have managed to climb Mount Everest and reached Mars, but are yet to build sufficient toilets. The song also asks people to not defecate in the open.

The actor further stated that people should maintain cleanliness in their households as well as in public places. The actor’s next stop was Agra where he addressed a group of people and tried to impress upon them the importance of cleanliness. During his promotional tours for Toilet – Ek Prem Katha, the actor had also met Prime Minister Narendra Modi who praised the film’s trailer and called it a good effort to spread the Swachhta message among 125 crore Indians. The film has grabbed considerable attention because of its unique theme which is based on the Swachh Bharat Abhiyan.