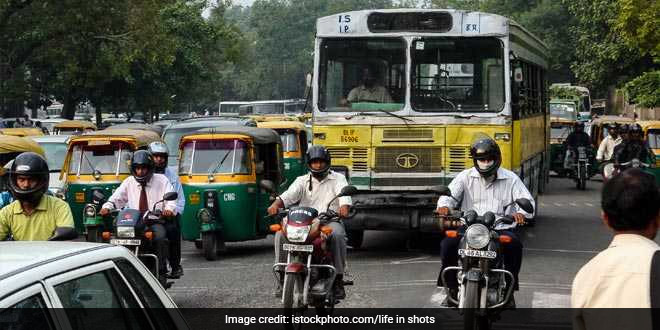 New Delhi: The Supreme Court-appointed Environment Pollution Control Authority (EPCA) on Monday informed the top court that commercial vehicles like trucks and taxis were the major source of pollution in the national capital and there was a need to control their operation. EPCA further told the apex court that heavy commercial vehicles release very high levels of carbon monoxide and nitrogen oxide into the environment. It pointed in its report that taxis like Ola, Uber travel 400 km per day, as against personal cars that travel 55 km per day due to which even if these vehicles use CNG, their net contribution to pollution will be high.

This requires restrain on the trucks entering Delhi and on ensuring that there is reduction in overall personal vehicle and that even taxi use is controlled through augmented bus and metro services, the report said, adding para-transit like taxi and auto rickshaw must use the cleanest fuel and technology.

The EPCA filed a report on the status of implementation of orders on air pollution in NCR and on the further directions needed, given the severity of the problem in winter. The EPCA’s report suggested measures such as cleaning up vehicles through technology and to reduce and restrain the growth of individual vehicles through massively augmented public transport systems, so as to re-check the sources of pollution.

The report cited the 2018 Emission Inventory of Delhi, released by the Ministry of Earth Sciences, according to which there has been a 40 per cent increase in vehicular pollution between 2010 and 2018 in Delhi and its adjoining areas, thereby making them the key contributors to air pollution in the national capital.

Out of all the vehicles, heavy commercial ones like trucks and other commercial vehicles such as taxis are the major polluting source, with very high carbon monoxide and nitrogen oxide emissions, it said. The report stressed on the fact that industries now contribute up to 18 per cent of the air pollution in the city and that industrial pollution has increased by a whopping 48 per cent between 2010 and 2018.
The report said industries contribute as much as 65 per cent of the sulphur dioxide emissions because of rampant burning of pet coke earlier and now coal, adding that sulphur dioxide standards issued under directions of Supreme Court needed to be enforced.

Brick kilns have been identified as a major source of pollution in the region, mainly because of poor technology and the extremely poor quality of fuel that is used, said the report.

It cautions that emissions from burning of municipal solid waste (MSW) and MSW treatment plants (waste to energy plants) was now emerging as the new challenge in Delhi. The apex court had passed directions on all sources of pollution, in addition to which the Ministry of Environment, Forests and Climate Change (MoEF&CC) has finalised the Comprehensive Action Plan for Air Pollution Control (CAP) as notified under Section 3 and 5 of the EP Act.

The EPCA report suggested further measures for the consideration of the court such as directions to the MoEF to expedite implementation of the CAP measures on “augmentation of public transport; non-motorised transport and inter and intra-NCR connectivity”.

The EPCA report sought directions with regards to regulation and enforcement of industries that are permitted to use pet coke, both domestic and imported. India had in July ordered limiting the import of pet coke to cement, lime-kiln, calcium carbide and gasification industries.

The report also suggested that the court may consider directing the pollution control boards of Delhi, Haryana, Uttar Pradesh and Rajasthan to inspect all factories in their NCR districts as per the Air Act and to report on compliance with standards for sulphur and nitrogen oxide.

EPCA Chairman Bhure Lal had placed a report on October 28 regarding the EPCA’s visits to various ‘hot spots’ to identify local sources of pollution in Delhi and NCR region and to check on enforcement of measures directed under GRAP.

The areas visited include Anand Vihar, Narela, Bawana, Nagloi, Mundka, Tikri, Kamrudin Nagar, Ranshola, Hiran Kudana, Baprola and Bahadurgarh, Dwarka and Faridabad. Anand Vihar, which is impacted by the presence of close localized sources such as two metro terminals, a railway terminal and two interstate bus terminals, was tagged as the most polluted location in NCR.