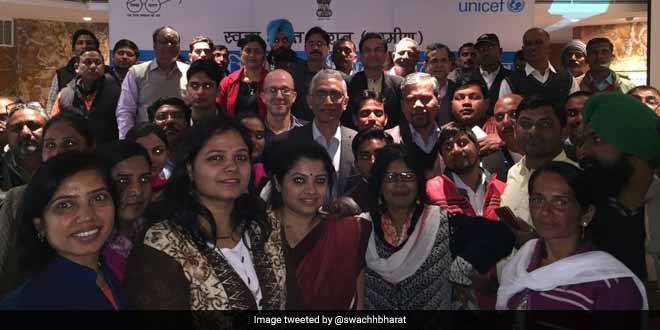 New Delhi: As 2017 nears its end, there are several takeaways for the Swachh Bharat Abhiyan to hail the year as a successful one in implementation of India’s national sanitation mission. With over 5 crore toilets built in rural areas and sanitation coverage reaching over 73 per cent, 2017 has been a successful year for the Swachh Bharat Abhiyan, though much remains to be done in the new year ahead. To ensure that the coming years are spell out equal success for the Abhiyan, arrangements are being made to spread further awareness among people about sustainability of open defecation free (ODF) statuses and importance of bringing in behavioural change. Two workshops were recently held which explored these two important aspects of sanitation, and saw large-scale participation.

An ODF Sustainability Workshop was held on December 19, which stressed on the importance of sustaining the ODF status for a village to ensure that open defecation does not relapse in a village that has attained the ODF status. While numerous toilets are being built under the Abhiyan, it is important that districts administration ensure that they are used and if a village or a district is declared ODF, regular monitoring must be done to ensure that the ODF status remains. The workshop was attended by dignitaries such as Nicolas Osbert, Head of WASH India, V. Radha, Joint Secretary, Ministry of Drinking Water and Sanitation (MDWS) and Parameswaran Iyer, Secretary, MDWS. Throughout the sessions of the workshop, issues and challenges on ODF sustainability and their solutions were discussed.

“An ODF village should sustain its ODF status. This is an opportunity to learn from states and their approach towards sustaining ODF status,” said Parameswaran Iyer at the workshop.

“An #ODF village should sustain its #ODF status! This is an opportunity to learn from states and their approach to sustaining ODF status” – Secretary, MDWS, Sh. @paramiyer_ pic.twitter.com/0P854iyP07

The workshop saw multiple discussions with stakeholders such as state representatives, NGO members and development partners on how developing mechanisms can help in sustaining incentives as grassroots levels to sustain ODF statuses.

Swachhagrahis from across the country are attending the workshop to discuss the best practices that encourage behaviour change and build a momentum towards #ODF India. pic.twitter.com/IbOItoXber

Teams of Swachhagrahis from Rajasthan, Haryana, Chhattisgarh and Madhya Pradesh participated in the workshop, discussing some of the factors that dominate the process of behavioural change among communities. They also shared best practices with fellow participants at the workshop. Participants also presented their thoughts on behavioural change and what measures they took to make their villages ODF. The workshop was also attended by Arun Baroka, Joint Secretary, MDWS.

The arranging of such workshops not only brings together like-minded individuals, but also provides a utilisable platform for exchange of ideas on ODF sustainability and behavioural change. As India enters a crucial and challenging year for the Swachh Bharat Abhiyan in which the likes of Uttar Pradesh is scheduled to go ODF, such workshops can ensure that ODF statuses remain sustainable for households, in the longer run.

Also Read: No Haircut Or Tea For Those Who Do Not Use Toilets In This Open Defecation Free Rajasthan Village