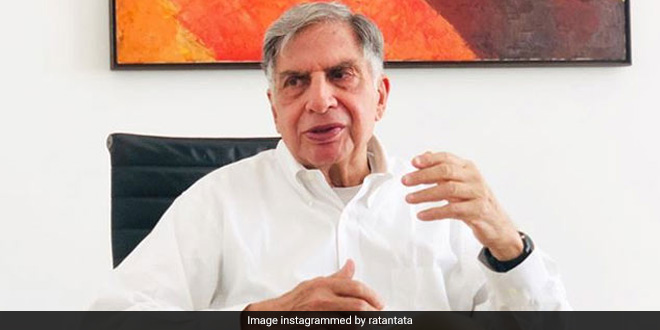 New Delhi: “Mission Garima is working to provide safe, hygienic and humane working conditions for sanitation workers who are severely affected doing the unimaginable for the city so that we may find it clean,” said the Business tycoon and philanthropist Ratan Tata in a heartwarming Instagram post. The said post was shared with a video, where a boy can be seen in his classroom reciting a poem that starts with the words, ‘Mera baba desh chalata hai’ (my father runs the country).

The fifth grader goes on in his poem to say neither is his father a politician nor is a policeman, a doctor, or an army man, but without him the country would come to a standstill and then reveals that his father is a sanitation worker. The video then cuts to showing his father getting ready for work and then climbing down a sewer to clean it.

Meanwhile, the schoolboy in his recital explains that the country doesn’t segregate wet and dry waste, which forces his father to go deep inside garbage and gutters, risking his life.

In Mumbai, a city of 23 million, only 50,000 individuals are employed as sanitation workers. They are working in difficult conditions every single day to tackle the enormous amount of waste that Mumbai generates, Dr. Tata writes in the post.

He further requested his followers to segregate their biodegradable and non-biodegradable waste to reduce the burden on sanitation workers.

The #TwoBinsLifeWins campaign is a part of Tata Trusts’ Mission Garima which urges citizens to segregate waste at the source, to make the lives of the sanitation workers better, more dignified.

Under Mission Garima, the Trusts have identified and procured technologies to make the process for waste management more mechanical, and reduce human intervention, explained a spokesperson for Tata Trusts. She added,

Tata Trusts has provided improved Personal Protective Equipment (PPE) to more than 150 sanitation workers in Mumbai on a pilot basis, in collaboration with the Municipal Corporation of Greater Mumbai.

The launch of the campaign will further see the distribution of more sets of PPE which includes masks among other items, at a first-of-its-kind model ‘chowki’ at Mumbai’s Kurla, jointly inaugurated by Tata Trusts and MCGM.

Chowkis are facilities in every ward where cleanliness workers assemble to begin their day, and come back to change and rest at the end of their days.

The first-of-its kind model chowki in Kurla comprises office space, separate rooms for men and women staff with improved water and sanitation services, storage, and a functional open space. It will be equipped with amenities like a water purification system, microwave oven, a gym, among other recreational activities, the spokesperson added.

Mr. Divyang Waghela from Tata Trusts also spoke about the urgent need to improve the working conditions for the sanitation workers. He said,

Sanitation workers are the backbone of large metropolitan cities like Mumbai. They help in keeping our city clean, and in order. It is imperative that efforts are made to ensure their safety, and to protect their dignity. Mission Garima wants to bring about a significant positive impact in the work environment of sanitation workers. With #TwoBinsLifeWins, we hope to prod the conscience of the nation and encourage citizens to segregate waste at their respective homes, so sanitation workers live a life of dignity and respect.

The video posted on Ratan Tata’s Instagram post has been viewed more than 2.5 lakh times within five hours of being shared and the initiative has also won praise from many.

‘We all need to come together for a better, cleaner India,’ said an Instagram user while another one added, ‘Such initiatives provide a medium to bring people together. Let’s make our country, the country of our dreams.’