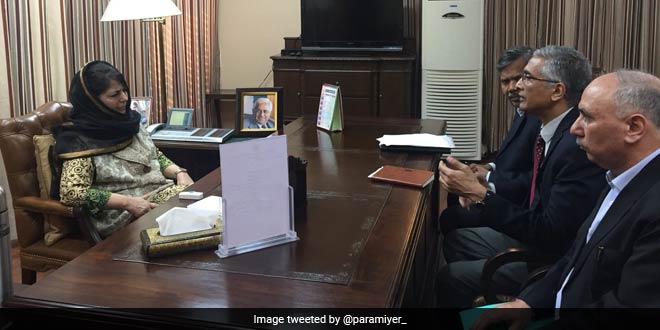 New Delhi: Union Drinking Water and Sanitation Secretary Parameswaran Iyer met Jammu and Kashmir Chief Minister Mehbooba Mufti and briefed her about the schemes and allocations made by the ministry to the state. Mr Iyer, who is currently on a tour of the state, discussed enhancement of the funds allocated to the state, an official spokesman said.

Meanwhile, Mr Iyer and state Chief Secretary B B Vyas today co-chaired a video conference with deputy commissioners here to review the progress of the flagship Swachh Bharat Mission (SBM) Gramin programme in the state. While appreciating the progress made by the state in the implementation of the SBM Gramin programme, Iyer informed that across the country, sanitation coverage in the last three years has doubled from overall 38 per cent to 78 per cent and in J&K , it has reached up to 50 per cent from 23 per cent during the same period.

Over 350 districts across the country have been declared open defecation free (ODF) including the three from J&K – Leh, Kargil and Srinagar, he said, adding over four lakh toilets have been built in the state during the last three years including 2.39 lakh in 2017-18.

“With the active support of the state and the Centre in promoting cleanliness and achieving the objective of Swachh Bharat Mission (Gramin), efforts should be made to make and declare the entire state ODF by or before December, 2018,” said Mr Iyer.

He complimented the state for conversion of 94 per cent dysfunctional toilets into functional ones and for 100 per cent conversion of insanitary latrines and coverage of Gram Panchayats (GPs), the official said. During the meeting, based upon the coverage already achieved, month-wise timeline were drawn for the districts to be targeted for ODF by or before December, 2018.

The districts of Shopian and Pulwama with over 75 per cent coverage already are expected to be declared ODF by March 2018, the spokesman said.