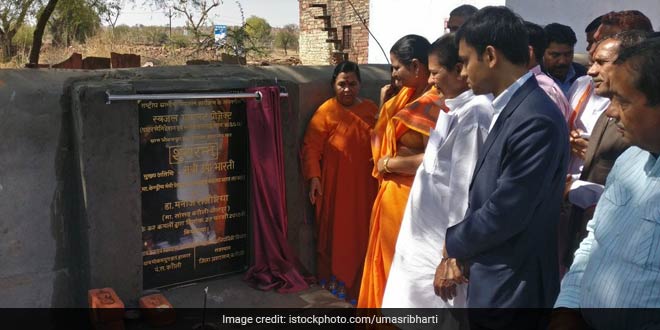 New Delhi: To ensure availability of clean drinking water to every household, Union Minister for Drinking Water and Sanitation Uma Bharti launched the second project under the ‘Swajal Yojna’ at Bhikampura village in Rajasthan. The Union Drinking Water and Sanitation minister had launched the first project in Uttarakhand’s Uttarkashi district last week.

The budget for the pilot project for Rajasthan at Bhikampura is Rs 54.17 lakh, a drinking water and sanitation ministry statement said. Under the scheme, 90 per cent of the project cost will borne by the government and the remaining 10 per cent will be contributed by the community.

Besides ensuring round-the-year the availability of clean drinking water to every household, the project would also generate employment, the statement said. Ms Bharti urged villagers to own the project that would start soon.

“The operations and management of the project would be taken care by locals. As per the plan, four reservoirs would be constructed in the village and common tap connection would be given to almost 300 households.

“Bhikhampura village has a scarcity of drinking water and villagers have to walk at least three kilometers to collect it,” the statement said.

“During the lean season, water is supplied by tankers. The new project would ease the lives of the people and ensure that potable water is available for every individual,” it said.

The minister also reviewed the progress in six key sectors including health, nutrition, education, skill development, agriculture, financial inclusion and basic infrastructure. Ms Bharti suggested officials to take necessary action to expedite the process for early implementation of the programme. The ministry would closely monitor the progress of the project, she said.

Public Toilets Are At Your Disposal, If You Will Not Keep Them Clean, Then Who Will: Ayushmann Khurrana

Fine of Rs. 50, If Found Defecating In The Open In Odisha’s Capital Bhubaneswar