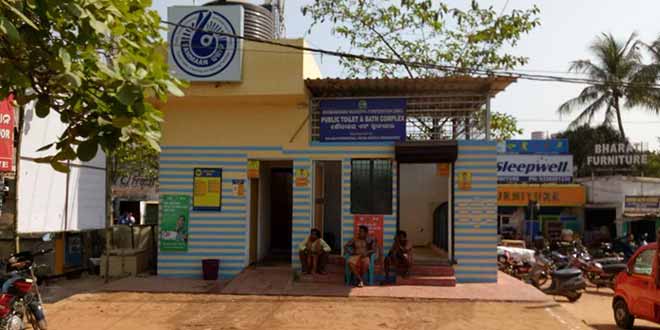 New Delhi: Open defecation in Odisha’s capital Bhubaneswar, which won the “Smart City Challenge” in February 2016, will now invite a fine of Rs. 50 as the Bhubaneswar Municipal Corporation (BMC) looks forward to declare the city fully open defecation free (ODF) by March 31, 2018. The civic body has adopted this measure to stop people, especially slum dwellers, from defecating in the open grounds and to meet its Swachh Bharat Abhiyan commitments. Besides, a massive awareness-cum-behaviour change drive, including installation of 280 hoardings across the city to promote safe sanitation practices has also been planned in order to fight the open defecation menace.

While talking to NDTV about the decision, Gopal Panigrahi, Public Relations Expert with Bhubaneswar Municipal Corporation stated, “Since we have won the ‘Smart City Challenge’ so our priority is to make Bhubaneswar fully ODF. We can’t be lagging behind in sanitation coverage at times when we are working hard to improve the quality of life in the city. The decision to impose the fine is to ensure that the city on the whole goes ODF.”

As part of the Smart City project, the BMC is developing a smart district area under which there are 24 slum areas out of which 21 have already been declared ODF post the construction of community toilets and installation of mobile toilets wherever necessary to prevent open defecation during events and public exhibitions, the municipal official said.

The civic body has been constructing community toilets within 500m of slums where households do not have space to construct individual household latrines. Besides, public toilets are being constructed within a 1km radius in commercial areas across the city.

Currently, there are a total of 149 public toilets and 26 community toilets in the city, each with the capacity of 5-7 toilet seats. All of these toilet facilities are geo-tagged so a user can find its location on Google Maps. Citizens can also use the toilets inside all fuel pumps in the city.

For slums, the civic body has also deployed surveillance (nigrani) committees formed at the slum level to look after people violating the norms. Each committee comprising 11 to 30 voluntary members will monitor and impose fines to make slums free from open defecation. Notably, the committee’s will only collect the fine, not the civic body, and will use the money for the upkeep of the community or public toilets in their vicinity, said Mr Panigrahi.

According to the municipal authorities, the officials along with the workers of the Swachh Bharat Mission and NGOs are training the surveillance committees on how to keep the record of the fine collected and efficiently use the money for the maintenance of toilets. “Bill and Melinda Gates Foundation have been funding the construction of community toilets in the smart city and they also keep a check on its maintenance,” the BMC official added.

Till 2016, the number of public and community toilets in the city was 73 but due to the civic body’s toilet building initiatives, the number has increased to 175 now. And now with the decision to impose fine for defecating in the open, the civic body has paved its way to sustain the ODF status as per the deadline.