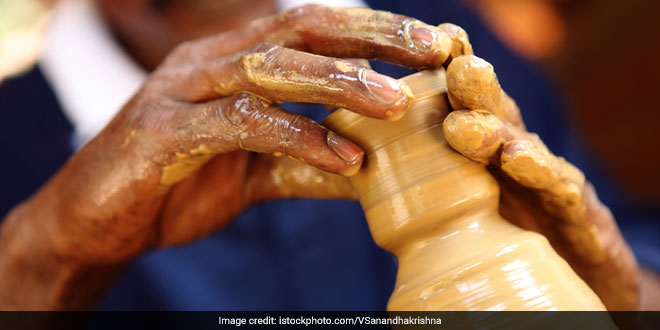 New Delhi: As Uttar Pradesh braces itself for a complete ban on plastic from July 15, the state government is initiating some steps to promote alternatives to plastic. The ban on plastic in the state will extend to plastic cups, glasses and plates. To promote and provide alternatives to these items, the Uttar Pradesh state government will set up a Pottery Board. The board will monitor the setting up of earthenware industries, give rapid clearances to them and promote the use of earthenware among people. The board will also look to revive pottery and handcrafted earthenware. On July 6, Uttar Pradesh Chief Minister Yogi Adityanath announced that plastic items will be banned in the state from July 15.

The ban on plastic has been imposed on Uttar Pradesh thrice before in 2015, 2016 and 2017, but the results have been less than satisfactory as plastic items continue to thrive in the state. Following the hue and cry over lack of alternatives with regard to the Maharashtra plastic ban, Uttar Pradesh is looking to stress on making alternatives to plastic an emerging industry. The government is looking to reduce the use of plastic by making alternatives more accessible to people. Pottery Boards are existent in many states like Rajasthan, Haryana, Punjab etc. where they are responsible for promoting manufacture of earthenware.

“The primary aim of the Board will be to frame policies pertaining to development of alternatives using pottery. The Board will see that raw materials are easily available to artisans and they get fair prices in the market for the earthen cups, glasses and other items they make,” said Sidharth Nath Singh, Uttar Pradesh Health Minister and Government Spokesperson at a press conference.

Speaking at a gathering organised by the Indian Industries Association on July 10, Uttar Pradesh Chief Minister Yogi Aditynath spoke further about the plastic ban in the state. The Chief Minister said that the state has declared a new war on plastic with the announcement of the ban. He said that people want cleanliness but are not willing to let go of their habit to use plastic products. CM Adityanath further added that plastic waste, from packets to bottles to plastic cups, can be found everywhere and even if safai karmacharis get tired of cleaning, there seems to be no end to the problem of plastic waste. He appealed that cooperation from every individual is needed to enforce the plastic ban effectively.

Despite the Chief Minister’s announcement of a plastic ban from July 15, confusion reigns supreme among municipal bodies on the nature of the ban. The state government is yet to come out with a complete list of items included and excluded in the ban. A government notification on July 12 said that plastic bags below 50 microns are banned. Chewing tobacco sold in plastic pouches will also be a part of the ban. But the lack of a complete list of banned items has municipal bodies confused in the state.

We have not received a formal notification from the CMO office yet. We do not know what is completely banned and what is not. We will start seizing plastic bags less than 50 microns from July 16. When the complete list is out, we will act accordingly, said Santosh Kumar Sharma, Municipal Commissioner, Kanpur Municipal Corporation.

With less than two days remaining for the plastic ban in Uttar Pradesh to come into force, it will be crucial to see if Uttar Pradesh will be fourth time lucky in effectively imposing the ban on plastic. Give its sheer size and population, the task of implementing the ban is no mean task.