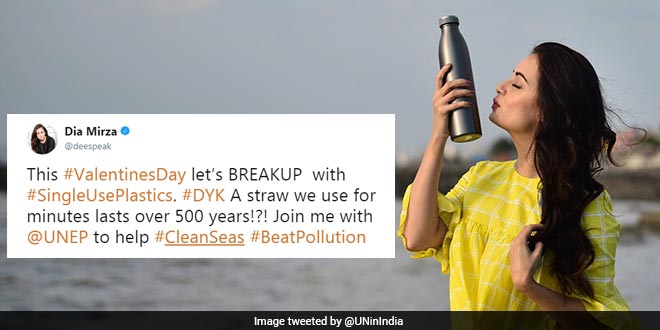 New Delhi: ‘This Valentine’s Day let’s ‘Break-Up’ with single use plastics,’ appeals actor and United Nations Environment Programme (UNEP) goodwill ambassador Dia Mirza to netizens. The actor along with UNEP has started the ‘Break-up’ campaign in a bid to address the global challenge of plastic pollution, which is choking the oceans and marine life. If we go by numbers, more than eight million tonnes of plastic goes into the oceans every year. According to United Nations, experts predict that there will be more plastic than fish in the world’s oceans by 2050 unless people stop littering the seas with single-use plastic items such as plastic bottles and bags. In a bid to change this deadly scenario, the actor has started a war against plastic, through a series of tweets, Dia Mirza is asking people to ditch the use of plastic and let the oceans breath without plastic, she adds,

Do you know a straw we use for minutes lasts over 500 years!, Join me with @UNEP to help #CleanSeas #BeatPollution.

This #ValentinesDay let’s BREAKUP with #SingleUsePlastics. #DYK A straw we use for minutes lasts over 500 years!?! Join me with @UNEP to help #CleanSeas #BeatPollution https://t.co/N9rsVx6qPk

Watch: Single Use Plastic Should Be Banned To Curb Plastic Menace: Dia Mirza

In another tweet, Dia Mirza shared a short, thought provoking promotional film, ‘The Break-up’, which takes a lighter look at the issue of marine litter and asks viewers to make a pledge to break-up with single-use plastics, such as mineral water bottles and straws. She tweeted,

Micro-plastics pollute the most remote and unchartered areas of our ocean. This #ValentinesDay let’s breakup with #singleuseplastics.

Micro-plastics pollute the most remote and unchartered areas of our ocean.
This #ValentinesDay let’s breakup with #singleuseplastics.
Let's pledge for #CleanSeas with @UNEP @UNinIndia https://t.co/WWplCRYUtG pic.twitter.com/7sgklRaLmf

Also Read: We Have To Stop Polluting Our Environment With Plastics: Actor Dia Mirza

The actor also shared a simple picture of a cloth bag on Twitter asking people to ditch their traditional plastic carry bags and instead opt for an alternative like a cloth or jute bag.

The actor is a long-standing supporter of environmental causes, she is already known for replacing plastic from her life. The actor uses a toothbrush made from bamboo, she also doesn’t rely on plastic water bottles, instead the actor believes in refilling and reusing bottles for quenching her thirst.

Also Read: Actor Dia Mirza Shares How She Is Replacing Plastic From Her Life

Dia Mirza has been consistently voicing her concerns over plastic pollution in the country. At NDTV’s Banega Swachh India 12-hour Cleanathon on Rashtriya Swachhta Diwas on October 2, she said that India needs to ban single use plastic in order to curb growing plastic menace. She also added that as a country we need to have a better waste management system and should improve awareness in not just civil society but also in administration.

Taking the war against plastic forward, Dia Mirza’s Valentine’s Day message for everyone is,

I urge everyone to give up the toxic relationship with plastics and find a new love. We can all start by choosing a forever relationship with real love for cloth shopping bags and metal or glass water bottles, re-usable coffee mugs and saying no to straws. Breaking up with single use plastic can really help save our oceans and beat pollution.

This Valentine’s Day, Say Goodbye To Plastic. Watch This Short Film To Know Why

Over 11 Billion Pieces of Plastic In The Oceans Contaminating Coral Reefs, Warns Study