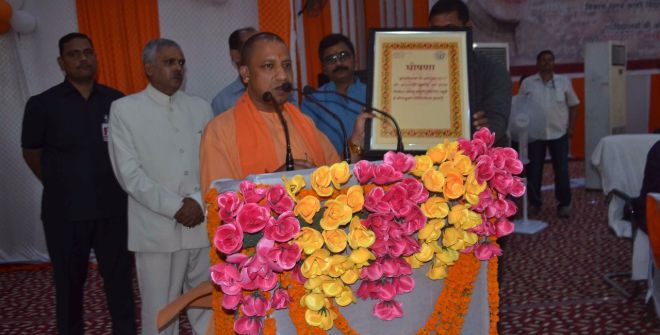 New Delhi: Varanasi moves ahead in its Swachh mission, by constructing approximately 19,000 toilets and the city declared its first block, Kashi Vidyapith free from Open Defecation. Chief Minister Yogi Adityanath handed the Open Defecation Free certificate to the local authorities in Varanasi on Wednesday, which aims to go ODF by constructing around 2.51 lakh toilets by December 31, 2017.

The first block of Varanasi – Kashi Vidyapith is free from #OpenDefecation now. Hon'ble Chief Minister, Shri @myogiadityanath declared the block #ODF. It had a demand of over 19000 toilets. 618 masons were trained here in twin pit Technology. pic.twitter.com/aoCuCSyhlb

Speaking to NDTV, Sunil Verma, Chief Development Officer Varanasi said, in a bid to achieve this mammoth target, many unique steps were taken. From authorities, to individuals, everyone was involved to do their best for Swachh Varanasi campaign. We have trained some 618 masons to construct toilets in a bid to achieve the success.

Also Read: Varanasi: The City Is Constructing 1100 Toilets Every Day In Order To Make Its Two Blocks Open Defecation Free

Apart from focussing on toilet construction, the block had also adopted various unique steps to achieve the ODF goal.

Explaining the initiative taken by the authorities, Mr Verma added, it is not just one campaign that has worked for us, it is the effort of all the campaigns taken together. Initially, we started motivating people by using the ‘Good-Old Triggering’ technique, where we mix religious beliefs, social and traditional beliefs all together and try to encourage and educate people on why constructing toilet is important for them. Another method which we have adopted is that we encourage anganwadi and asha workers to convince other people to build toilets and guide them on benefits of using a toilet. If they are successful in getting a toilet constructed at an individual household then we pay them Rs. 75/per toilet. And, if a user uses it for 6 months, then we pay additional Rs. 75 to these workers.

Apart from all these steps, the block also appointed a Nigrani Samiti who made sure that people defecating in the open are stopped.

All these efforts added up to help the Block achieve 100 per cent sanitation coverage. Varanasi on the whole in now constructing 1100 toilets daily against its old number of 47 per day in a bid to meet the deadline of December 2017 to go ODF and become the first city in Uttar Pradesh to achieve the ODF status.

In A Hurry To Clean Up Delhi Air, No Sight Of Long-Term Goal, Say Experts