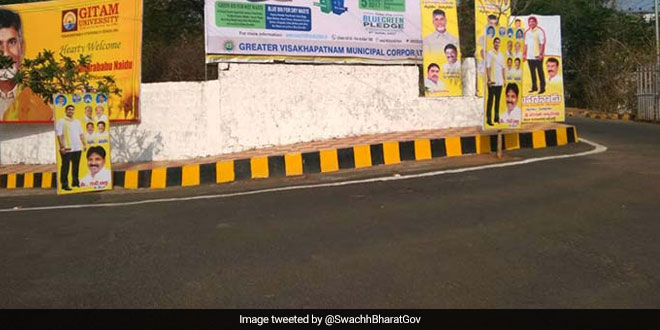 Vishakhapatnam in Andhra Pradesh is officially going to launch source segregation of waste at the zonal level on World Environment Day on June 5. As part of the nationwide  campaign, the plan is to host an awareness programme which will include political leaders, city residents, swachh grahis, swachh leaders, NGOs, Resident Welfare Association (RWA), Slum Level Federation (SLF) and student welfare bodies like National Service Scheme (NSS).

The city currently generates 900metric tons of waste on a daily basis. Though door to door waste collection has already been implemented in the city, its reach is only 50 percent at present. The vehicles used for the collecting wastes are pushcarts and autos.

Till now the door to door collection that has been happening is mixed, there’s no segregation of waste. But from June 5, source segregation would start, said Mr. A. Hemanth, Chief Municipal Officer of Health, GreaterVisakhapatnam Municipal Corporation.

To make the city cleaner and more organized, the municipal authorities plan to increase the reach of door to door waste collection  to 100 percent and ensure that all the zones are well aware of source segregation.

In the Swachh Bharat Surveskhan 2017, Visakhapatnam was listed amongst the top cleanest cities and it ranked fifth in the survey commissioned for 73 cities by the Ministry of Urban Development.

Now as 4000 cities gear up to participate in the waste segregation campaign from World Environment Day on June 5 till October 2, as announced by Prime Minister Narendra Modi in his recent Mann Ki Baat, Visakhapatnam will be putting in all the efforts to better its cleanliness quotient and rank by next year.

World Environment Day: Delhi Will Initiate Collection Of Segregated Trash From June 5, But Will It Achieve The Waste Treatment Target?