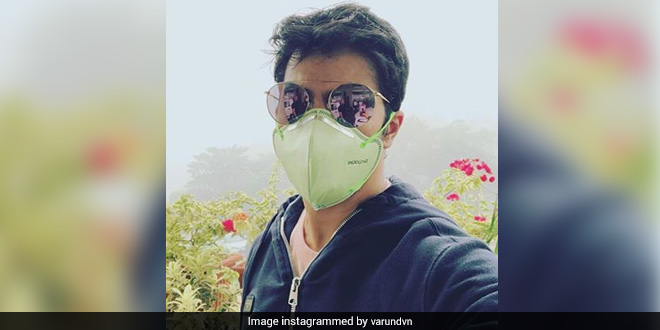 New Delhi: ‘The way things are looking at the moment is bad and we need to take actions if we need to survive in this beautiful planet,’ Actor Varun Dhawan expresses his concern as the national capital – New Delhi chokes due to a deadly smog. The 30-year-old actor took to social media and through a series of posts urged people to start taking adequate actions and help the city and country combat the Air Pollution crisis. First, he posted a selfie of himself wearing a ‘mask’ and said, “I have clicked this selfie to show you guys what actual smog looks like. I don’t want to preach, I am equally to blame for this mess as most of the citizens of our great country, but now instead of blaming each other and the government let’s change. It’s time we go green. #delhichokes.’

Also Read: Air Pollution: Not Just Limited To Delhi, Several Other Indian Cities Choking Due To Depletion In Air Quality

This was followed by a video message with suggestions for Delhiites on what they can do to protect the environment,

Firstly, we should stop burning garbage, as it is one of the major reasons why smog is spreading. So, it is important for us to recycle our waste, it is not a difficult task, few simple steps and you will be good to go. I really love Delhi a lot and it breaks me to see it like this. If we all take some green steps, I’m sure we can overcome this.

The actor also said that people should start looking for alternatives, for example carpools. He further added,

It is time we should start rethinking, we will have to do something, for us, for the future generation, for the other creatures living in this planet. Rethink!

Rethink. Let’s change instead of blame. @adarpoonawalla has taken a great initiative let’s all try and keep our cities clean and recycle waste instead of burning it. pic.twitter.com/qzNJL5dWdq

Earlier the actor along with Alia Bhatt was part of a short video clip that spread the message to keep India clean. The video is part of a series and the it is expected that the actor will soon come out with another video to highlight the importance of recycling waste.

Battling Delhi’s Killer Smog: Is Odd-Even The Answer To Deal With Air Pollution?