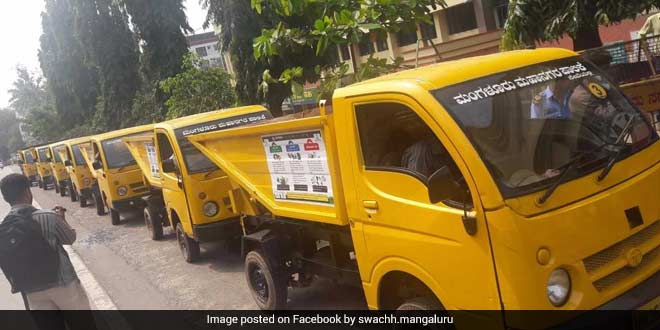 New Delhi: The massive generation of solid waste in India, estimated to be around 62 million tonnes every day, is a big problem which many urban civic bodies are finding difficult to tackle. The speedy rise of urban population in India has resulted in encroached spaces across all small and big cities which has impacted waste collection and put immense pressure on civic bodies to manage waste. Karnataka’s Mangaluru has faced the wrath of unplanned waste management for some time now and the city is struggling to deal with its daily generation of 275 metric tonnes of waste.

Mangaluru ranked 63rd in this year’s Swachh Survekshan, an annual ranking of cities based on cleanliness. The city’s performance was moderately impressive, scoring a total of 1,349 out of 2,000. But the waste management scenario in the city has deteriorated since the conclusion of the Survekshan, as garbage collection has taken a severe hit. Several areas across the city are witnessing piled up garbage which has not been cleared for three to four days due to the civic body’s disagreement with the private company which was handed over the responsibility of collecting garbage from the streets of Mangaluru. For the last few months, disagreements between the civic body and the private organisation, Antony Waste Handling Cell , have reached such proportions that waste collection in the city has come to a standstill, affecting thousands of citizens and the city’s civic health.

Not only garbage collection, but cleaning of storm drains has also taken a hit in the city. Putting the blame on the private contractor, councillor Bhaskar Moily said that the contractor was neglecting its duties and has failed to send garbage collectors on time to collect garbage.

Waste management in the city has not been up to the mark for the past two months, mainly because the contractor in charge of managing the waste has been lacklustre. The garbage collectors turn up nearly three hours late every day, which results in many residents disposing the garbage in open spots. The contractors have also not provided the workers with suitable equipment to collect or transport garbage, which often results in much of the garbage not transported to the landfill or waste treatment plant, said Mr Moily.

The Mangaluru civic body alleges that the private contractor has not collected the garbage from all the parts of the city in the past two months despite charging a collection fee from the civic body. Further, the contractor had not upgraded the garbage collection vehicles and when existing vehicles had broken down, such as the one in Kunjathbail South, there was no effort on the part of the contractor to replace them. The Mangaluru Municipal Corporation Commissioner Mohammed Nazir had also met with the representatives of the private contractor to discuss the ongoing crisis.

I have already met with the company responsible for garbage collection in Mangaluru and they have assured they will look into the matter. We have given them a two week window, during which they must address the problems or else we will have to resort to legal options, said Mohammed Nazir, Commissioner, Mangaluru Municipal Corporation.

There may have been a few lapses on our part but paying garbage collectors, maintaining so many machines is an expensive affair and the collection free provided by the MMC is inadequate. We have also spoken to the commissioner on the matter, said an official from Antony Waste Handling Cell Pvt. Ltd.

While the city awaits the rift between the MMC and the private company to come to an end, the recent crisis is another example of how co-operation between civic bodies and private organisations tread on a delicate balance which ought to be maintained by both the parties. The common complaints regarding such arrangements are the mismatch of financial foresight, as private parties do not receive enough from municipal corporations, resulting in less payment to garbage collectors and contributing to their dissent. If the Swachh Bharat dream is to become a reality, civic bodies ought to take into consideration all factors that may hamper waste management in a city and work on them beforehand to avoid Mangaluru type situations.