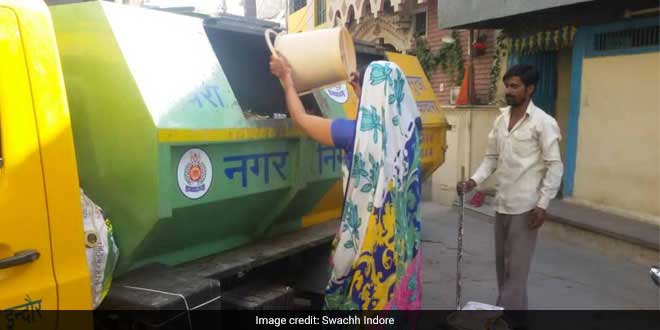 New Delhi: Given the dire scenario of waste management in India, the Centre for Science and Environment (CSE) in December 2017, had launched ‘Forum for Cities that Segregate.’ The forum was a collective of large and small cities, engaged in discussions related to scientific management of waste, waste segregation and transformation of waste into usable resources. With 26 member cities on board, including some of the municipal corporations of Delhi-NCR, the forum has been working towards sustainable waste management solutions in cities. In the 2017-18 assessment report of 20 out of 26 cities released by CSE on June 7, the CSE declared that smaller cities have done better and have been more innovative in implementing waste segregation at source.

The CSE awarded the cities based on their performance and conferred upon them the Leaves Awards. Vengurla in Maharashtra received the highest Five Leaves award. The four cities of Indore, Vengurla, Panchgani and Alappuzha have a waste segregation and dry waste processing percentage higher than 90 per cent, said the CSE. Along with these four cities, the two cities of Mysuru and Balaghat have wet waste processing percentage of over 90 per cent. The South Delhi Municipal Corporation and the East Delhi Municipal Corporation were awarded the Two Leaves award and the Gurgaon Municipal Corporation received the One Leaf award.

Our objective through this assessment is to work with cities and help them perform better and continue to reinvent their waste management systems, CSE’s deputy director general Chandra Bhushan told PTI.

CSE assessed that smaller cities have done better than their larger counterparts in implementing segregation at source. Their approach to manage waste has been more innovative than bigger cities. Central Pollution Control Board Chairman S.P.S Parihar, who was present at the event said that Indore has set an example in waste management and the CSE Forum can help find catalysts to aid in improving the waste management scenario across cities in urban India. Mr Parihar also added that to manage waste successfully and scientifically, it was critical to move towards the policy of reusing and recycling.

Related Topics:
Center for Science and Environment Waste Management Waste Segregation
Up Next