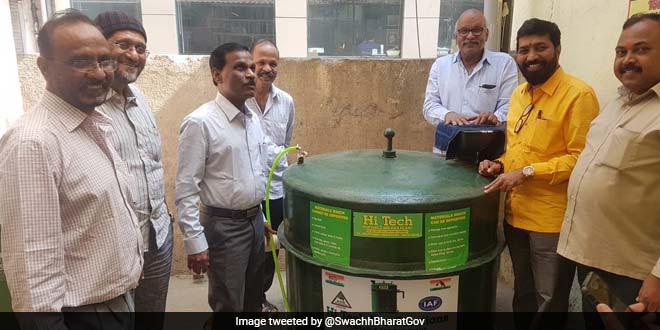 Mumbai: Practise what you preach, seems to be the latest moto adopted by the Brihanmumbai Municipal Corporation (BMC) that is driving the concept of waste management in densely populated city of Mumbai. Setting an example for citizens, the N Ward in Ghatkopar has launched a technology to repurpose its waste and produce cooking gas fuel from it. It is producing biogas from a waste converter machine. The cooking fuel is being used for stoves in the N ward office canteen.

The biogas converter machine is a tool of awareness and will be open for anyone who wants to adopt a similar practice at home. We are willing to train people, experts and NGOs to make the process easier. There are several waste management practices being followed across India to improve the environment and this our bit.

The plant was procured at Rs 35,000 and has the capacity to treat 5 kilos of wet garbage daily. It includes food items, soiled food wrappers, hygiene products, yard waste, tissues and paper towels, as well as any other soiled item that would contaminate the recyclables like plastics. 5 kilos of waste can produce up to 2.5 kilos of biogas.

Also Read: After Facing The Wrath Of Municipal Corporation, This Housing Society In Mumbai Takes Up The Challenge To Treat Their Own Waste

Talking about other benefits of the biodigester plants, Mr Irfan says that the plant also gives one litre of slurry, a watery mixture of solid waste. The slurry can be converted into manure on adding four litres of water to it. The manure will be used in BMC-owned parks.

Making biogas from organic material is a good way to manage potentially harmful organic wastes. Cooking with biogas does not produce smoke so it is ideal for the home, and it reduces the need to cut down trees for firewood. The digested slurry can be used wet or dry as a valuable soil conditioner, reducing the need for chemical fertilisers, adds Mr Irfan.

The decision of treating waste scientifically by the N-Ward comes in a year after the BMC had directed all the societies and commercial establishments (producing waste above 100 kilos) to process their own waste. Even today, 50 per cent of the bulk generators in the city do not follow the norm as per a BMC official. Now, with a biogas plant in BMC’s canteen, the authorities hope that more people will follow the suit.

This is not the first time, authorities in Mumbai have taken innovative and smart steps to reduce overall waste generation. A similar technique of converting garbage into biogas was adopted by the Western Railway (WR) in May 2018. The biogas plant installed by the WR converts around 250 kilos of wet waste generated from the base kitchen in Mumbai Central’s canteen to biogas every day. The produced biogas is used to cater to long-distance trains from Mumbai Central.