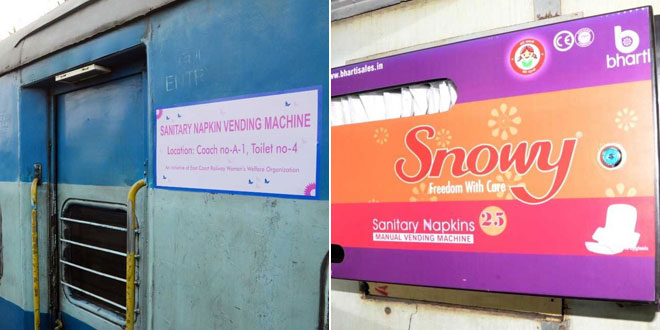 New Delhi: As part of the Indian Railway’s drive to improve sanitation and hygiene on board its trains and to make travelling comfortable for women passengers, the East Coast Railway (ECoR) installed 91 automatic sanitary napkin vending machines in 36 trains on Monday. It is also a step towards promoting India Railway’s vision of ‘Swachh Rail – Swachh Bharat’, said Mr. J.K. Mishra, spokesperson of ECoR. He added that East Coast Railway Women’s Welfare Organisation has been instrumental in this drive as they have raised the demands on multiple occasions. These machines have been installed in the important trains originating from Puri, Bhubaneswar, and Visakhapatnam. Mr. Mishra said,

ECoR decided to extend the facility to 36 trains keeping in view the positive response received from women passengers after installation of automatic sanitary napkin vending machines in Hirakhand Express. We started receiving demands from passengers of other trains too. So we decided to provide the humble service to the passengers and enhance the goodwill of the people for Railways. ECoR currently has the highest number of sanitary napkin vending machines in our trains. Lady passengers are really getting help. Many have thanked Railway staff. This credit should go to East Coast Railway Women’s Welfare Organisation for pioneering this item.

According to the health and sanitation officer, S.K. Sahoo, ECoR has installed Automatic Sanitary Napkin Vending Machines at railway stations, ladies’ waiting rooms, and at residential quarters in Bhubaneswar, Visakhapatnam, Puri. He added that ECoR has now become the first Railway Zone in Indian Railways to undertake such an extensive exercise for installation of automatic sanitary napkin vending machine.

Elaborating on the usage of the machine, Mr. Mishra said,

The sanitary napkin vending machine installed in ECoR trains can vend 75 pads at a time. The passengers can get the napkins by inserting a Rs. 5 coin in the vending machine.

Another official of ECoR said that the staff in charge of sanitation in the train will be restocking these machines and will be taking care of the operation of the machines.

Talking about ECoR’s future plans for the drive, Mr. Mishra said that the East Coast railway has planned for installation of these vending machines in more trains keeping in view the demand and response from the passengers. He said,

We will be installing more machines soon as we want to make it an essential part of every train in the days to come. But above all, we will be working on ensuring proper maintenance and upkeep of the machines which we have already installed.

Kumbh 2019: This Is How Ganga Is Being Kept Clean During The Kumbh Mela