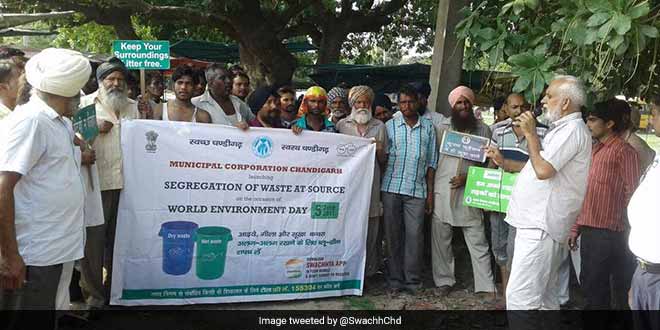 Waste management has been an integral part of the Swachh Bharat Abhiyan, ever since the mission’s launch in October 2014. Management of waste, especially in urban spaces is a challenge because of rising population, people’s unwillingness to segregate waste and apathy of civic bodies have all contributed to the mess. Chandigarh, one of India’s planned urban metros has been reeling with the issue of waste management and the lack of any direction in dealing with it of Chandigarh Municipal Corporation (MC) has not helped the cause either. As waste management gradually gains the stature of a bigger problem for the city, the civic body is desperately trying for several measures to manage waste in the city.

While the Rock Garden and Rose Garden are undeniable the main attractions of the city, many parts are characterised by big waste dumps. The major problem for Chandigarh has been the closure of the city’s lone processing plant in June 2017. The processing plant was a privately owned one, and differences between the plant owners and the municipal corporation over remuneration resulted in the plant’s shutdown. Currently authorities are clueless about what to do with the waste generated, which amounts to nearly 350 tonnes daily, as estimated by the Central Pollution Control Board (CPCB) in 2015.

Since March 2017, waste processing in Chandigarh faced severe problems due to the constant tussle between the privately contracted waste processing plant owners and the civic body. Since then, the plant processed only 150 tonnes of waste daily, compared to its daily capacity of 450 tonnes. Only 33 per cent of waste was recycled in June 2017, resulting in a final round of disagreement between the stakeholders and closure of the plant.

Despite having agreed to the previously stated terms and conditions, the waste processing plant authorities asked us to pay them more in the middle of the year. Despite an order from the National Green Tribunal in May 2017, which clearly asked the contractor to process waste as per the plant’s capacity, the amount of waste processed kept coming down. Now we have no other option but to dispose the waste at Dadumajra, said Manoj Khatri, Joint Commissioner, Chandigarh Municipal Corporation.

The civic body’s lack of plan was evident as in absence of a proper backup plan, as MC chose the Dadumajra dumping ground as the spot where waste is being dumped ever since the closure of the plant. Residents of Dadumajra, however, have been very unhappy with the move as dumping of waste in a residential area will soon result in diseases spreading throughout the area. Despite getting assurance from the MC about a case being filed against the contractor, the residents are highly displeased with the decision.

We have identified apartments with more than 50 flats as bulk generators and will install waste to compost plants in them. This will significantly reduce the amount of total waste generated by the residential apartments. The compost will be bought by MC and sold at subsidised rates to buyers, said Mr. Khatri.

To further address the issue of waste management in Chandigarh, the municipal corporation, in association with National Productivity Council, arranged for a capacity building technical workshop where all stakeholders, including municipal commissioners, waste management experts, local councilors, NGOs, self-help groups and waste collectors were invited. The workshop stressed on how behavioural change could be brought among local public by encouraging them to segregate waste. Concerned authorities were asked to comply with the norms of Waste Management Rules (2016).

The workshop also saw presentations related to successful solid waste management and how waste segregation contributes to the overall reduction in waste generation, thus ensuring that there is less waste to be processes in treatment plants.

The workshop brought together several stakeholders, all related to the problem of waste the city is facing. The Government is coming up with several reforms on waste management and we plan to be on the same path. We have also distributed blue and green coloured bins across the city to encourage segregation of waste in households, said Baldeo Purushartha, Municipal Commissioner, Chandigarh.

With the lone waste processing plant shut, Chandigarh’s only hope towards proper waste management is waste segregation in residential apartments. With proper segregation, residential societies would be able to reduce the waste they produce as biodegradable waste would be used for composting. Chandigarh slipped to 11th from 2nd in Swachh Survekshan rankings 2017, due to garbage disposal not being up to the mark, along with lack of adequate public toilets and shortage of nearly 1,400 waste collectors. To re-enter the top 10 rankings, Chandigarh will be required to address all aspects of municipal waste management, along with continuous citizen participation in segregating waste.

Towards A Waste Free Society: Goregaon Residents Gear Up For The New Rule Of Segregated Waste From October 2 In Mumbai