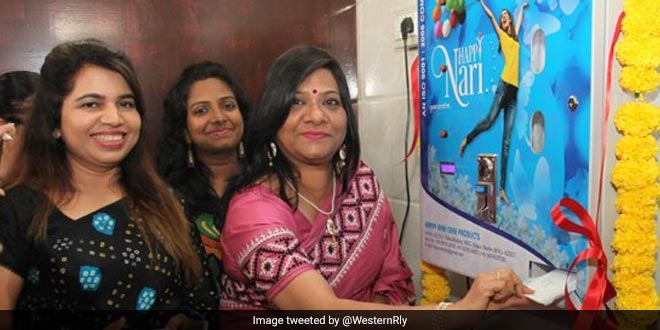 New Delhi: Three days ahead of India’s 69th Republic Day, Western Railway (WR) gifted its female staff the freedom from mensuration taboo. In what may hailed as a remarkable step for women, the Western Railway (WR) has installed sanitary napkin vending machines and incinerators in six of its divisions – Churchgate, Mumbai Central (Maharashtra), Vadodara, Ahmedabad, Rajkot, Bhavnagar (Gujarat) and Ratlam (Madhya Pradesh). Considered to be one of the busiest railway networks in India, the WR has taken this major step in a bid to make female employee’s working environment sanitised and healthy.

The project was initiated by the Western Railway Women’s Welfare Organisation (WRWWO) and all the six divisions inaugurated the machines within a span of two days, Western Railway headquarters at Churchgate being the first one. A demonstration on how to dispense the sanitary napkin from the coin-operated vending machine and how to dispose it in the incinerator was carried out by WRWWO President Archana Gupta. She also made an appeal to female staff asking to them to take maximum advantage of the two machines and help the country change its perception towards menstrual hygiene.

One can procure a sanitary pad by simply inserting a coin of Rs 5 in the vending machine. The used pad can be inserted in the incinerator and switching it will automatically attain the requisite temperature and convert it into ashes and control the ill-effects of conventional or casual modes of disposal, besides contributing to the ‘Clean India-Green India’ drive.

Similar demonstrations were carried out by respective Presidents of WRWWO in Rajkot, Vadodara, Ahmedabad, Ratlam and Bhavnagar.

Earlier this month, Bhopal became the first railway station in India to provide low-cost sanitary pads to its women staff and commuters. The Bhopal Junction Railway Station had set up ‘Happy Nari’ sanitary napkin vending machine. Like the WR, it was the Railway Women Welfare Association of Bhopal which had taken the initiative and the response was tremendous on the first. Around 600 napkins were dispensed from the vending machine within 8-9 hours.

Besides the railway department, India’s apex legal body Supreme Court also broke away from the period stigma and installed three sanitary napkin vending machines incinerators each. Municipal authorities of Delhi and Karnataka also addressed the issue of menstrual hygiene. While the South Delhi Municipal Corporation installed a Pink Toilet equipped with facilities of sanitary napkin dispensers and incinerators, the civic bodies of Karnataka are currently under the planning stage of a similar  project.