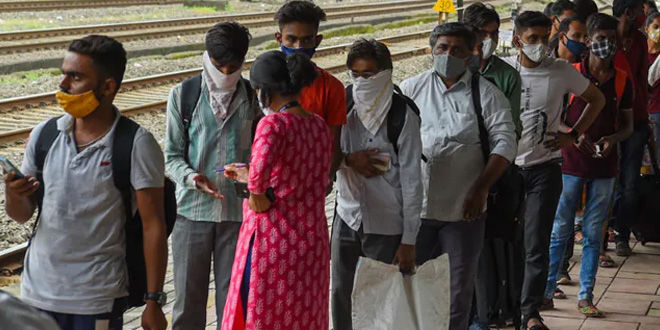 New Delhi: The government on July 20 announced the findings of the fourth national sero survey and said that two-thirds of the population – aged above six years – has SARS-CoV-2 antibodies but stressed that around 40 crore people are still vulnerable to the infection. State heterogeneity ‘indicates the possibility of future waves of infection,’ the government warned, adding that people should travel only if fully vaccinated.

Also Read: Effects Of Future Waves Of COVID-19 On Children Are Speculations: Doctor

The fourth serosurvey shows there is a ray of hope, but there is no room for complacency. We must maintain Covid-appropriate behaviour, ICMR chief Dr Balram Bhargava said.

A survey of 36,227 people, including 7,252 healthcare workers, conducted across 70 districts in 21 states in June-July indicated 67.6 per cent of Indians over the age of six had COVID-19 antibodies.

Over 50 per cent of 8,691 children between the age of six and 17 who were tested also had the antibodies.

This was the first national survey to test for antibodies in those under the age of 18, a decision taken amid widespread concern that future waves could affect children.

In the third sero survey conducted in December-January, 2021, the sero-prevalence was 24.1 per cent. Besides, 85 per cent of the surveyed healthcare workers in the fourth round were found to have antibodies against SARS-CoV-2 and one-tenth were still unvaccinated.

Also Read: Study Shows Why Second Dose Of COVID-19 Vaccine Should Not Be Skipped

A third of the population did not have SARS-CoV-2 antibodies, which means approximately 40 crore people are still vulnerable to COVID-19 infection. Those without antibodies run the risk of infection waves, Dr Bhargava said.

Dr Tanmay Mahapatra, public health expert and Epidemiologist talked to NDTV to explain how we should be looking at this sero survey and what does the seropositivity tell us about our fight against COVID right now.

These sero survey are to give us an idea about how infection has spread through the population and where do we stand currently. The presence of antibody among people actually comes from two different sources, it is either through infection or it is because of successful vaccination. The result shows that two-third of population has been infected, it means, firstly, it is still not over, there is no reason to believe that not maintaining the COVID appropriate behaviour needs to continue. Furthermore, it also tells us that vaccinations need to speed up, a large proportion of the population still needs to be vaccinated. We also need to work on vaccine hesitancy and ensure We ramp up vaccinations.

The huge jump in the sero positivity as witnessed from the third sero survey to the fourth, Dr Suneela Garg, Director, Professor, HAG Community Medicine, explains how the data can be looked at.

We have been recording infections continuously, at no point did we stop having fresh COVID-19 cases. At the peak of the second wave, we had about 4 lakh cases daily. Plus, the sero survey has also included people who have taken the vaccine. We are slow at vaccinating our population, but we have still vaccinated over 4 crore people. This explains the big jump in sero positivity.

Dr Mahapatra further talked about how the serosurvey doesn’t necessarily tell us about the severity of the third wave, because of the variants. This variant could potentially infect someone who even has antibodies. He explained,

To assume that, since 2 out of the three people have antibodies, the severity or the infectivity of the third wave can be lower than the previous wave is not right. That kind of speculation may be very risky because we are dealing with existing variants and strains, as well as newer mutations. We know how fast the initial variant changed and we had the Delta variant, and also Delta plus. There could be severe in the terms of disease, which has been classified into mild, moderate and severe. After that, we have the complications of those conditions, factors like oxygen dependency, pulmonary functions, among others.

As per the survey, over 50 per cent of the kids between the age group of 6-17 had antibodies as well. Dr Garg says that this shows how children may not be affected the worse in the third wave. She explains,

We have to keep in mind that for children, the infections are lower, milder in nature and subsides easily. We need to protect our children with the COVID appropriate behaviour. So, infection among children will be much less in the third wave and will likely subside fast. So, we don’t have to worry much.

Effects Of Future Waves Of COVID-19 On Children Are Speculations: Doctor