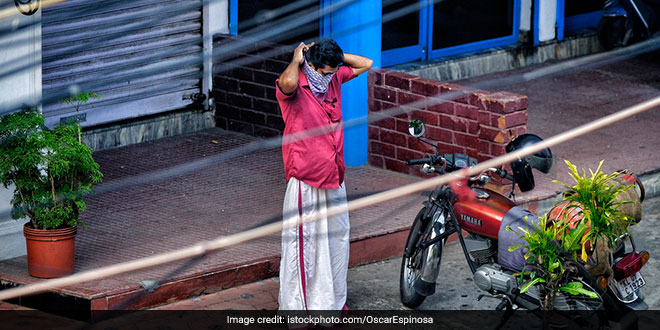 New Delhi: India recorded its first case of COVID-19 from Kerala, when on January 30, a medical student returning from Wuhan in China was tested positive for the virus. The southern state of Kerala, which was being lauded for its efforts in containing the COVID-19 pandemic, is now witnessing a strong second wave of infections. The state has seen the COVID increasing so much so that it is now competing with the worst affected states in several parameters now. Today, Kerala’s total cases stand at 3.6 lakh, with about 94,000 cases that remain active.

Kerala is right behind Maharashtra and above Karnataka in the most number of active cases, with the states having 1,50,510 and 92,946 cases respectively.

With over 1,200 deaths, Kerala has a fatality rate of 0.35 per cent, which is four times lower than the national average of 1.45 per cent.

Kerala reported 8,369 new COVID-19 cases on Wednesday (October 21) out of the 62,030 samples tested. The state recorded a test positivity rate of 13.5 per cent, compared to the 7.3 per cent average national positivity rate. Among active cases, 804 patients were critically ill and being treated in ICUs, with 196 on ventilator support.

The Health department official that the state also recorded 26 deaths, six of which were reported from Thrissur, five each from Thiruvananthapuram and Kollam, three each from Ernakulam and Kannur and two from Palakkad.

To further strengthen their strategy of ‘Trace, Quarantine, Test, Isolate and Treat,’ amid the ongoing spike, the state has also reduced COVID-19 test rates.

Except for Antigen tests, the cost of which will remain Rs 625, every other testing method will cost less. The price of RT-PCR tests that used to cost Rs 2,750 in Kerala will now cost Rs 2,100. While the Truenat test cost has been reduced from Rs 3,000 to Rs 2,100, the Gene Xpert test will now cost Rs 500 less as it has been revised to Rs 2,500. The costs are inclusive of PPE, swabbing and other charges. The revised rates will be applicable for all the private testing labs and hospitals, said Rajan N Khobragade, principal secretary (health) in a recent statement from the Kerala Health Department.

The state is also establishing STEP (Screening Testing Education and Prevention) Kiosks as per the ICMR prescribed norms at appropriate places such as airports, railway stations, bus stand, and other congregation places to facilitate early detection and containment activities, he added.

Government Perspective On The COVID Spike In Kerala

While the government had initially controlled the transmission in the state with campaigns like ‘Beak the Chain’, the current spike has been attributed to the unlocking of the state. At the 12-hour telethon by Dettol and NDTV, Kerala Health Minister, KK Shailaja said, on October 2,

When the lockdown was lifted for travelling in May, about 10 lakh people residing in other countries and states came back to Kerala by air, water, road and train. We followed proper protocols with this population and followed our strategy of trace, test, quarantine and treat. To contain the virus spread in each of these clusters, we are supplying medicines, healthcare facilities and healthcare workers inside these clusters itself. However, we are struggling in this sense as once we control a cluster, there’s a new one that emerges. But we are trying our best to rid Kerala from coronavirus, our initial preparedness is helping us right now as well.

Union Health Minister Dr Harsh Vardhan, on Sunday, said that it appears as if the spike in the country is due to the relaxations in regulation to celebrate Onam, observed between August 22 and September 2. A Centrally-appointed medical committee recently warned against a spike that is expected during the festival time and the onset of winter, if safety measures are not strictly observed.

This should be seen in a positive way. Festivals are coming across India. Large gatherings are expected. Kerala as a state withstood well, but people violated protocols and had gatherings. This should not happen in other places, Dr Vardhan had said in his Sunday Samvaad episode on October 13.

The committee has cited the case of Kerala where after the Onam festival, a sharp rise in Covid numbers was observed from September 8.

The infection probability increased by 32 per cent and the effectiveness of medical response dropped by 22 per cent for Kerala in September, the committee had said.

However, Kerala Chief Minister Pinarayi Vijayan refuted these assumptions saying it was ‘against facts’ as very little relaxations were allowed during the festival.

In this context, the CM also said that the reality in Kerala was different, as people were told that there would be no public celebrations, programmes or gatherings. Restrictions were not eased in containment zones, the CM said.

Shops were functioning till 9 pm. Malls, shopping complex etc were allowed, but with restrictions and home delivery was encouraged, he said.

Experts Take On The Spike

Experts are, however, concerned about this spike. According to them, Kerala has a population that is one-third of Maharashtra and almost half of Karnataka. So, if Kerala is nearing these two states in terms of active cases, such a high number of daily cases is a cause of worry. Dr Ajay from the Indian Medical Association (Kerala) explains that the daily cases graph that seemed to have been controlled during the lockdown but is now increasing rapidly.

The state of Kerala is a relatively smaller area also pushes up its population density, which is an important factor that is impacting the transmission of COVID-19. While Karnataka and Maharashtra have 318 and 365 people per square km respectively, this figure for Kerala is 384. Furthermore, the absolute number of daily cases in Kerala’s districts is lower than what Delhi, Mumbai or Pune (the worst-hit districts of India) record, but the daily proportion of the population being infected with the virus is still higher than these megacities in 12 out of its 14 districts. On average, Delhi is recording 2,800 cases every day, Mumbai 2,300 cases and Pune 1,900 cases. The same is 1,240 in Malappuram and 1,100 in Kozhikode districts of Kerala. This margin makes a huge difference since the population of Kerala is almost equal to the entire population of these three megacities.

Most of Kerala’s districts now record higher daily cases per million population than the worst affected places Delhi, Mumbai and Pune, he added.

There are ICUs and ventilators ready in districts to treat COVID patients but there is no adequate trained manpower. There is excess pressure on the existing facilities due to this. If and once we reach our peak, we are concerned about the number of deaths rising, he said.

The expert committee headed by Dr B Ekbal has been asking the health department to train doctors and nurses to handle the critical care units but nothing much has moved on the ground, Dr Kane added.

There is also a manpower crisis, with health workers in conflict with the government. Doctors have been working tirelessly and frustration is growing now, said Dr Kane.

COVID mortality in the state is one of the lowest in the country at is 0.35 per cent. This is four times lower than the national average of 1.45 per cent, meaning for every 1,000 infected people, over three lost their lives to the virus in the state. But owing to the ongoing spike and the expected spike in the coming two weeks, experts say that we must wait for the fresh fatality trends for at least a month. This will help us analyse if the state has shown a worsening of the mortality.