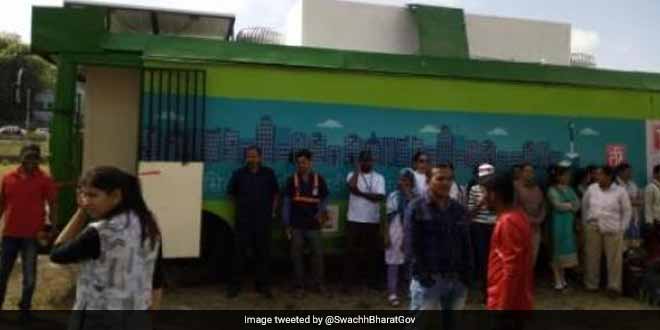 Remember those days when women would wake up early morning and along with others in tow would go out to do the early morning business in fields. They would always go under the cover of darkness for the fear of men lurking around and watching them. Even though in the urban part of India women have the facility of having toilets at their home, they still feel the same fear and repugnance while using public toilets. They wouldn’t want to use a unisex washroom that is unclean, unhygienic and unsafe.

To combat this issue, Pune Municipal Corporation (PMC), under Swachh Bharat Abhiyan has started mobile toilets which are designed especially for women. The Pune Mahanaar Parivahan Mahamandal LTD (PMPML) buses were in a terrible state and were about to get scrapped.  PMC decided to renovate and build them into moving toilets.

Three of these buses have already been circulated in FC Road and Shivajinagar and the plan is to launch nine more.  The bus is pretty huge and it won’t be a task to sight them.

No country faces open defection issues more than India. Out of 1.2 billion people in India, roughly 60% still defecate in the open. The government has constructed more than 3 crores toilets so far under the swachh India campaign and has declared more than 2 lakh villages and 139 districts open defecation free. Approximately 300 million women in India still have no other choice but to defecate in the open. When it comes to urban sector, using public toilets is more harmful for women because unlike men, they have to squat down. This makes them prone to various infections, urinary tract infection being a common one.

The Municipal Commissioner wanted these toilets to be built especially for women so that they don’t face trouble using toilets when in public. It is a big bus with a nice interior and will be comfortable to use, said Goutham Katta, City Transformation Unit.

These mobile toilets will make washrooms accessible for them without the fear of feeling embarrassed or falling sick. These toilet buses are extremely safe as they have guards deployed there for security purposes.

The money for the renovation of these buses went from the government’s pocket and the commissioner even sourced funding through Corporate Social Responsibility (CSR) activities. Till now there is no money charged on the usage of these mobile toilets but soon enough a charge of Rs 5 might be levied.

PMC is planning to explore a different model where the responsibility to operate these buses could be given to someone who would manage it without any cost. The person can earn money from the revenue made by these buses and through advertisements.

The city faces a challenge in constructing public toilets as the citizens are not very supportive towards it. These mobile toilets will definitely bring a lot of change in their perception, said Mr Katta.