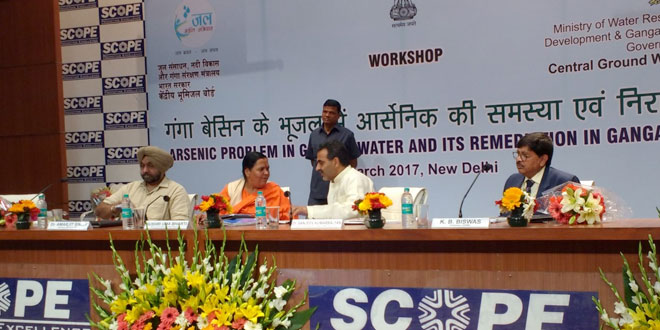 For residents of several districts and villages along the Ganga basin in the states of West Bengal, Bihar, Jharkhand and Uttar Pradesh, diseases like skin cancer, skin pigmentation, lung cancer and diarrhoea are not uncommon. It is even more unfortunate that daily usage of a basic necessity like water has resulted in them contracting such diseases. Arsenic found in groundwater in dangerous quantities has not only contaminated the water in many of these areas, but has also put the population at risk of contracting severe diseases.

Arsenic laden water has been a recurring hygiene issue in India. Traces of arsenic were first found in 1983 near the Ganga basin in West Bengal. Till the 1990s, groundwater containing high levels of arsenic was found in the Eastern Ganga belt, in the states of West Bengal, Jharkhand, Bihar and Uttar Pradesh. Since the new millennium, traces of arsenic have been found in groundwater in other parts of India as well, putting more people at risk.

A 2015 report by the Central Ground Water Board (CGWB) states that traces of arsenic contaminated water have been found in 153 districts in 21 states in India are, taking the total number of people residing in arsenic affected areas to approximately 40 million. Apart from causing health hazards, arsenic contaminated water has also disrupted the food chain and its effects have been visible on edible items cultivated near the Ganga basin in Eastern India, where the levels of arsenic have been found to be unusually high.

To tackle the problem of arsenic holistically, the CGWB under the Ministry of Water Resources, River Development and Ganga Rejuvenation held a workshop on 7th February, 2017 in New Delhi to address the issue of arsenic in groundwater in India and remediation procedures. 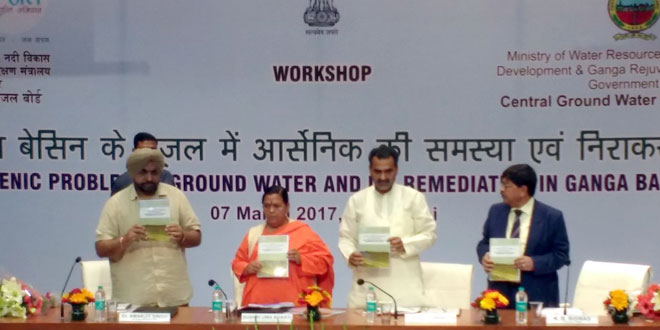 The invitees at the release of the technical report on arsenic contamination.

The problem of water contaminated with arsenic is a highly serious issue. Contaminated water was earlier found only in the Eastern Ganga belt, but over the years has spread to major parts of north India. To combat this problem, we must look at alternative sources of water for villages and districts where the arsenic level is high. Simultaneously, we should also look at filtering solutions which could be implemented in these places, said K.B. Biswas, Chairman, Central Ground Water Board, during the inaugural address of the workshop.

The problem of arsenic contaminated water has been present in India for more than three decades. Both the Union government and respective state governments have undertaken various technological options to combat the arsenic menace. Methods like in-situ remediation of arsenic from aquifer system, ex-situ remediation of arsenic from tapped groundwater and removing arsenic from tapped groundwater using reverse osmosis have been frequently used to remove arsenic from groundwater. Under the National Aquifer mapping programme (NAQUIM) of CGWB, special attention has been given to the menace of arsenic and water wells have been constructed with arsenic free aquifers, in parts of Ballia in Uttar Pradesh where arsenic free tube wells have been constructed in 107 villages in 2016.

Another major issue related to arsenic is the waste generated by arsenic and its indiscriminate disposal. Waste generated from purifying plants which treat arsenic laden water is hazardous and often disposed casually, resulting in extensive environmental damage. It is up to the Ministry of Environment to work in tandem with the government bodies working on the arsenic problem and issue guidelines related to arsenic waste disposal which must be followed to avoid any environmental damage. 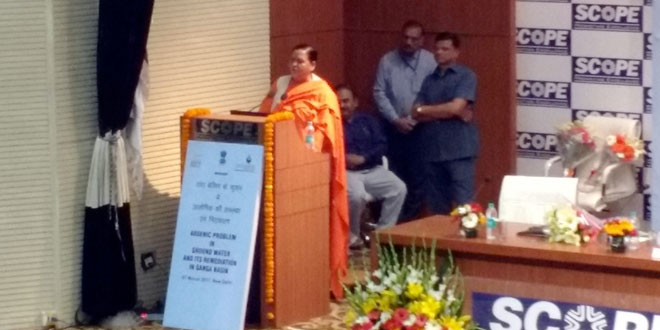 The problem of water contaminated with arsenic is a nationwide issue and I think all state governments, NGOs and related Central Ministries should cooperate to tackle this problem together. The Ministry will form an exhaustive plan to meet the challenges posed by the presence of arsenic in ground water. Along with government bodies, people are also requested to come forward and cooperate with them so that the problem can be tackled swiftly, said Uma Bharti, Union Cabinet Minister for Water Resources, River Development and Ganga Rejuvenation.

The problem of arsenic contaminated water also needs to be looked at by experts who can provide feasible solutions related to contaminated arsenic water. Subject matter experts who have worked extensively to understand the spread of arsenic levels in groundwater can provide suggestions related to alternative water sources in arsenic-high areas. Along with technological solutions, subject matter experts can identify alternate sources of water in arsenic heavy areas and advise the local population to use such sources.

Arsenic in high quantities poses significant health hazard for people. People need to be made aware on water quality and alternative sources of water must be made available with the help of central and state governments, as well as NGOs working in the fields of groundwater, said Dr. Sanjeev Kumar Balyan, Minister of State for Water Resources, River Development & Ganga Rejuvenation.

Also Read: Is Electronic Waste Being Dumped Along The Ganga? NGT Orders Probe

Related Topics:
Ganga
Up Next

Scuba Diving Off Kerala Coast To Spread The Swachh Message

40 Steps To A Toilet, Yet She Defecates In The Open