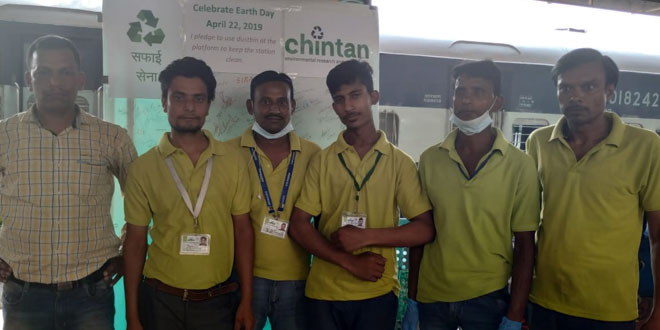 New Delhi: According to the Earth Day Network, every year over 1 billion people across 192 countries celebrate Earth Day on April 22 with a unique theme to show their support for environmental protection. This year the day is being celebrated with a theme ‘Protect Our Species’ that aims at guarding threatened and endangered species. Commemorating the Earth Day, waste pickers from Safai Sena, a registered association for waste handlers in partnership with Chintan, environmental research and action group, is creating awareness about waste and waste handling at New Delhi Railway Station, platform number 16.

As part of the initiative, waste pickers who collect trash at the platforms and trains, are educating passengers on waste management and requesting them to pledge to use dustbins at the platform to keep the railway station spic and span.

The waste pickers are not only asking people to pledge, but giving them lessons on different kinds of waste and how it is managed.

For instance, a passenger asked a waste picker, what do you do with the plastic bottles you collect? The waste picker explained the recycling process – the plastic water bottles are collected so that it can’t be refilled and sold to other passengers, it is taken to waste recovery facility where it is shredded into pieces and used to make some other product.

Also Read: ‘Waste Handlers A Key To Swachh Bharat’, Says Safai Sena As They Release List Of Demands Before Elections

It is also about the interaction between waste pickers and public, says Chitra adding, “They are the one educating individuals and asking them not to use PET bottles, crush plastic before tossing it in a bin.”

We work to clean up Delhi putting our own health at risk due to the unsanitary conditions we work in. It is time that every citizen of Delhi puts in the same effort and starts segregating waste so our work becomes more dignified and safer. We would like people to acknowledge our work, says Khalid, a 22-year-old waste picker from Safai Sena, who works at collecting and recycling waste at the New Delhi Railway Station.

We (Chintan) along with Safai Sena have been working at New Delhi Railway Station for last seven years. Over 100 waste pickers collect all kinds of waste from the platform, trains, and shops and take it to the Material Recovery Facility, a small land provided to us by Northern Railways.

The site provided near platform 16 works as a Material Recovery Facility where all kinds of waste is segregated into various categories and sent for treatment. While dry waste like plastic, paper is sent for recycling, wet waste is composted.

With the help of Safai Sena and Chintan, New Delhi Railway Station has achieved the coveted title of ‘waste free’. Every day, over four tonnes of waste is diverted from landfills. As per a book, ‘State of Waste in India: Eighteen Years after the First National Rules’ published by the Chintan Environmental Research and Action Group., out of the four tons of total waste collected per day, over 3.25 tonnes of waste is recycled.

Today, the waste pickers turned teachers for six hours (10 in the morning to 4 in the evening), gave waste management classes to hundreds of people and got over 500 pledges.