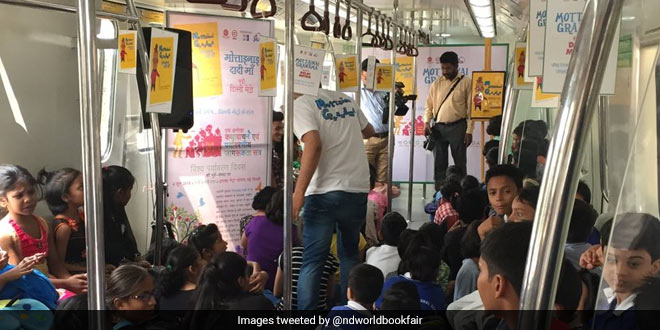 New Delhi: A storytelling session was held inside the carriage of the Delhi Metro today with the objective to promote environmental awareness among children and other people. During the session conducted inside a metro train at the Dwarka station, innovative ways were used to inform people about health, hygiene and waste management. The event was jointly organised by the National Book Trust (NBT) in collaboration with Kodansha, a Japanese publishing house, with support from the Delhi Metro Rail Corporation (DMRC) and Japan International Cooperation Agency (JICA), the Delhi Metro said in a statement.

Kumar Vikram, Editor, NBT, said, “We need to be sensitive towards environment and take care of our resources.”

The event, held on the eve of World Environment Day, was attended by nearly 150 participants including schools students, parents, teachers and officials from the DMRC, NBT, JICA and Kodansha. Anuj Dayal, Executive Director of DMRC’s Corporate Communication, spoke about “the special environment-friendly initiatives of Delhi Metro”.

There could not have been a better opportunity to educate children about the importance of environment and significance of respecting nature and resources, the DMRC said. Children’s picture book ‘Mottainai Grandma’, was published in India by the NBT under a license agreement with Kodansha. This picture book was narrated at the event. The concept of the book is in line with the message of Swachh Bharat Mission which advocates the vision of Prime Minister Narendra Modi, the DMRC said.