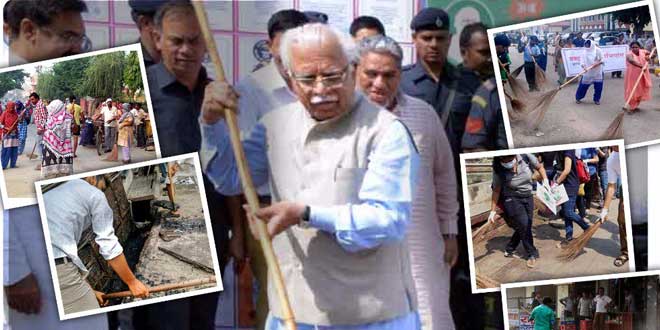 Haryana Chief Minister Manohar Lal‏ Khattar, announced that the state government will join the mass movement on World Environment Day on June 5, and conduct waste management drive in all villages.

Prime Minister Narendra Modi on his monthly ‘Mann Ki Baat’ announced that a ‘massive’ waste management campaign will be launched in 4000 cities on June 5, World Environment Day and will continue till October 2. Once completed, India will attempt to set a world record of 100 per cent waste segregation with this campaign where maximum number of people will pledge to segregate waste.

Chief Minister‏ Khattar announced the state’s participation in the campaign  on twitter and said, “On 5th June, Special Cleanliness campaigns will be organised in all villages of Haryana with 10,000+ population.”

On 5th June, Special Cleanliness campaigns will be organised in all villages of Haryana with 10,000+ population.

As per the Solid Waste Management Rules 2016, it is mandatory for everyone to segregate waste. However, the laws are not efficiently implemented due to lack of awareness. In order to overcome this problem the government is trying to promote the importance of waste management among people in this unique way.

The four month long campaign will educate people about segregation dry and wet waste.  As part of the campaign, the municipal bodies across India will distribute green and blue coloured dustbins to encourage waste segregation.

Various civic bodies have already begun to implement waste segregation by either passing laws or adopting innovative ways of waste segregation. For instance, the Ahmedabad Municipal Corporation has passed a rule under which it will not collect unsegregated waste from June and Udupi City Municipal Council has allocated days to collect dry and wet waste.

Under the Swachh Bharat initiative the government is striving hard to address waste management crisis in India. Every year India generates 62 million tonnes of waste out of which 45 million tonnes of waste remains untreated. If the waste generation continues at this pace, it is estimated that India will need a landfill size of Bengaluru to dump all its waste.

Making Waste Management A Mass Movement, A Campaign In 4,000 Cities Will Be Launched On World Environment Day: PM Modi