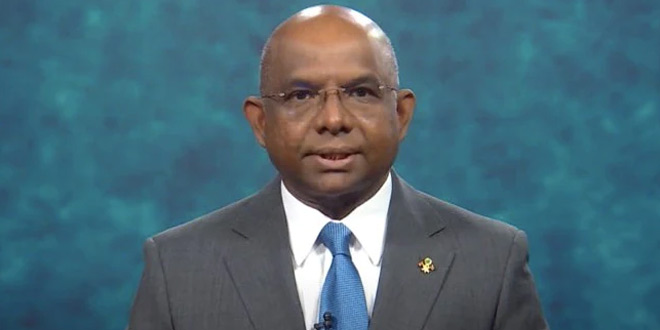 United Nations: Fragility, conflict, COVID-19 and climate change are the challenges confronting the world today, President of the 76th session of the high-level UN General Assembly Abdulla Shahid said on Tuesday (September 21), warning the world leaders that they are at a turning point and can choose a path of isolationism and mutual destruction or forging together a sustainable and resilient path. Mr Shahid, in his address to the opening of the 76th General Debate, said that challenges of climate change and the pandemic keep people awake at night and fuel a collective anxiety and worry that things are progressively getting worse the world wants peace of mind.

The people want solutions to the challenges we collectively face. And challenges are not in short supply. Fragility; conflict; COVID-19; climate change. The list goes on, Mr Shahid said. There are moments in time that are turning points. This is one such moment. We can choose a path of isolationism, of mutual destruction, of a slow retreat of the human experiment, or we can forge together a new path, a sustainable and resilient path that changes the future of our planet, he said.

While noting the plenty of challenges confronting the world, Mr Shahid said that there is a reason to pause for a moment and celebrate what has been achieved in the past two years. In record time humanity has developed multiple viable vaccines for COVID- 19. Scientists and researchers from dozens of countries collaborated on a remarkable feat of human ingenuity, he said. Even though the largest vaccine roll-out in the history of humankind currently underway is certainly not without flaws, Mr Shahid said “it is monumental in its undertaking.

The Maldives Foreign Minister Shahid, who took the oath of office as the President of the 76th session of the General Assembly last week, said that people are not wrong when they worry that world leaders are not doing enough to solve the problems facing the world.

On conflict and instability, the world has a near universal desire for nuclear disarmament and non-proliferation, yet it falters at the finish line, leaving treaties unratified, Mr Shahid said. On humanitarian concerns, we have enough food and water to provide for the planet many times over, yet there is genuine fear that we will see the return of famine and the impacts of drought.

Hundreds of millions will require humanitarian assistance by year’s end, he said. Mr Shahid, who has premised his year-long UNGA presidency on hope, said that he intends to pursue five rays of hope’ that will direct the efforts of the 193-member General Assembly this year.

He reiterated his support to the need to ensure vaccine equity and vaccinating the world, saying he intends to host a high-level meeting on the issue and to address the practical obstacles that have emerged around supply, storage and distribution. On the longer-term recovery from COVID-19, he will push for a recovery that builds back better, stronger, greener and bluer.

He also underlined the need to return the world’s attention to the climate crisis, which has taken a backseat due to the COVID-19 pandemic. We are no longer on the wrong path… we are on the edge of a cliff, he said on the climate emergency, as the recent report of the Intergovernmental Panel on Climate Change is being described as a code red for humanity. UN Secretary General Antonio Guterres has said that the alarm bells are deafening, and the evidence is irrefutable: greenhouse gas emissions from fossil fuel burning and deforestation are choking our planet and putting billions of people at immediate risk.

Global heating is affecting every region on Earth, with many of the changes becoming irreversible. Mr Shahid said he will host a series of events on climate action. The first in the lead-up to the 26th UN Climate Change Conference of the Parties (COP26) in Glasgow will help to build ambition and ensure that action is very much on the agenda, he said.

We must bridge the capacities needed to actually deliver on climate promises. It is one thing to have innovative renewable technologies, it is an entirely different thing if a country or community cannot absorb that technology. I believe we can close this gap, Mr Shahid said.

Another event will acknowledge the other major environmental efforts underway on the ocean, desertification, biodiversity and will aim to address these interlocking issues during this super session on the environment’.

Mr Shahid’s fourth ray of hope focuses on human rights. We must uphold the principles of the Universal Declaration of Human Rights above all else, particularly during moments of conflict or strife, as we have so recently seen, he said, adding that as the President of the UN General Assembly, he is determined to have a cross-cutting gender approach to his presidency, including advocating for a build back better approach to COVID-19 that prioritises gender-sensitive policies and initiatives. His final ray of hope is that UN reform and revitalisation must continue. This is not about a balance of power, “this is about efficiency,” he said.

Every organ of the UN must be at its peak, and must be able to deliver as it was intended. For the 7+ billion constituents around the world, this is what they see when they think of the United Nations iconic world leaders standing before a marble green backdrop debating, not whether to help, but how to help. Let us not let them down, Mr Shahid added.

Related Topics:
Coronavirus Environment
Up Next