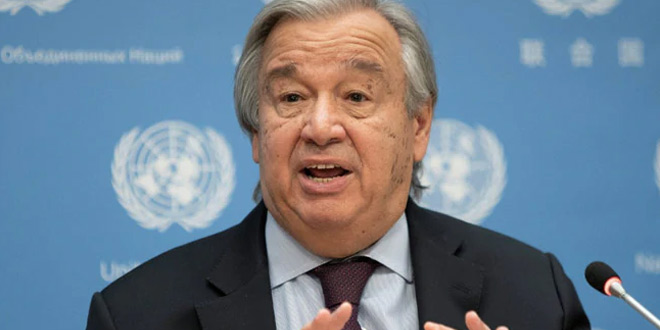 United Nations: The world has never been more threatened or more divided, and is facing the “greatest cascade of crises, UN Secretary General Antonio Guterres told global leaders on Tuesday (September 21), sounding an alarm over the COVID-19 pandemic, a climate crisis pummeling the planet and an upheaval in Afghanistan and other nations that is thwarting peace. Mr Guterres, in his address to the opening of the General Debate of the 76th Session of the General Assembly, said that human rights are under fire, science is under assault and economic lifelines for the most vulnerable are coming too little and too late, if they come at all, and solidarity is missing in action just when the world need it the most.

I am here to sound the alarm: The world must wake up. We are on the edge of an abyss and moving in the wrong direction. Our world has never been more threatened. Or more divided. We face the greatest cascade of crises in our lifetimes, he said.

The annual high-level week, which had to be held virtually last year due to the raging COVID-19 pandemic, returned to a hybrid format this year with over 100 Heads of State and Government as well as foreign ministers and diplomats scheduled to address world leaders in-person from the iconic General Assembly Hall here. Outlining the crises facing the world today, Dr Guterres said that the COVID-19 pandemic has supersized glaring inequalities, the climate crisis is pummeling the planet, the upheaval from Afghanistan to Ethiopia to Yemen and beyond has thwarted peace and a surge of mistrust and misinformation is polarising people and paralysing societies.

The COVID-19 pandemic, which has killed more than 4.6 million people and infected over 228 million people globally, has exposed glaring inequalities among nations over vaccine access and affordability, he said. More than 5.7 billion COVID-19 vaccine doses have been administered globally, but only 2 per cent of them in Africa, according to the World Health Organisation (WHO).

Perhaps one image tells the tale of our times. The picture we have seen from some parts of the world of COVID-19 vaccines in the garbage. Expired and unused, Dr Guterres said. The UN chief noted that while on the one hand vaccines have been developed in a record time on the other hand we see that triumph undone by the tragedy of a lack of political will, selfishness and mistrust.

A surplus in some countries. Empty shelves in others. A majority of the wealthier world vaccinated. Over 90 per cent of Africans are still waiting for their first dose. This is a moral indictment of the state of our world. It is an obscenity, Dr Guterres said. He said the world passed the science test when it produced vaccines in a record time and highlighted the victory of science and human ingenuity, but we are getting an F in Ethics.

Dr Guterres underlined the urgent need for a global vaccination plan to at least double vaccine production and ensure that vaccines reach 70 per cent of the world’s population in the first half of 2022. On climate change, Guterres said that the climate alarm bells are ringing at fever pitch and there are warning signs in every continent and region. Scorching temperatures. Shocking biodiversity loss. Polluted air, water and natural spaces. And climate-related disasters at every turn, he said. Dr Guterres warned that the window to keep alive the 1.5-degree goal of the Paris Climate Agreement is rapidly closing.

The world needs a 45 per cent cut in emissions by 2030 yet with present national climate commitments, emissions will go up by 16 per cent by 2030. That would condemn us to a hellscape of temperature rises of at least 2.7 degrees above pre-industrial levels. COVID-19 and the climate crisis have exposed profound fragilities as societies and as a planet, the UN chief said.

For far too many around the world, peace and stability remain a distant dream. In Afghanistan, where we must boost humanitarian assistance and defend human rights, especially of women and girls, he said, adding that in Myanmar, the world must reaffirm unwavering support to the people in their pursuit of democracy, peace, human rights and the rule of law.

He said that the world must bridge the climate divide by bridging trust between North and South. We need more ambition from all countries in three key areas mitigation, finance and adaptation. My message to every Member State is this: Don’t wait for others to make the first move. Do your part, he said.

He called on nations to bridge the gap between rich and poor, within and among countries. That starts by ending the pandemic for everyone, everywhere, Dr Guterres said. Warning that there is no time to lose, he said that a lopsided recovery from the pandemic is deepening inequalities as richer countries could reach pre-pandemic growth rates by the end of this year while the impacts may last for years in low-income countries.

Underscoring that the gender divide must be bridged, Guterres said COVID-19 exposed and amplified the world’s most enduring injustice: the power imbalance between men and women. Bridging the gender divide is not only a matter of justice for women and girls. It’s a game-changer for humanity, he said.

Dr Guterres called on world leaders to bridge the digital divide and the divide among generations. He said that half of humanity has no access to the internet and we must connect everyone by 2030. Young people will inherit the consequences of our decisions good and bad. At the same time, we expect 10.9 billion people to be born by century’s end. We need their talents, ideas and energies. They need a seat at the table, Dr Guterres added.