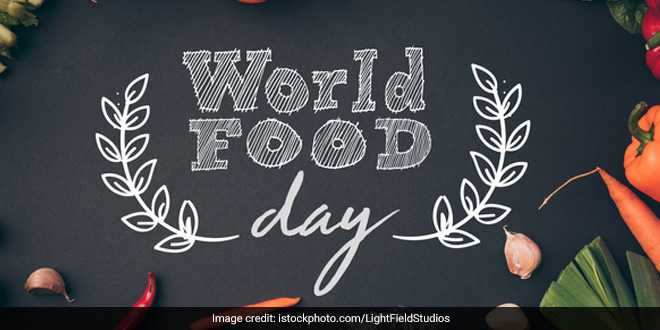 New Delhi: October 16, every year, is celebrated as World Food Day to mark the founding of the Food and Agricultural Organization (FAO) of the United Nations, which was established on the same day in 1945. The main goal of World Food Day is to promote the message that food is a basic and fundamental human right. In line with this objective, the day aims at promoting awareness about food, nutrition, and healthy eating practices across the world and urges people to take action against world hunger and unfair allocation of resources.

The theme for this year’s World Food Day is, “Our actions are our future. Better production, better nutrition, a better environment, and a better life.”

The food we choose and the way we consume it affect our health and that of our planet. It has an impact on the way agri-food systems work, says a statement by FAO.

What Is A Sustainable Agri-Food System?

A sustainable agri-food system is one in which a variety of sufficient, nutritious and safe foods is available at an affordable price to everyone, and nobody is hungry or suffers from any form of malnutrition. Less food is wasted and the food supply chain is more resilient to shocks such as extreme weather, price spikes or pandemics, all the while limiting, rather than worsening, environmental degradation or climate change.

As per FAO, sustainable agri-food systems deliver food security and nutrition for all, without compromising on the economic, social and environmental bases, for generations to come. Furthermore, FAO also highlights the drastic impact of COVID-19 in the worsening of global food insecurity and calls for everyone’s attention towards addressing it,

#WorldFoodDay 2021 will be marked a second time while countries around the world deal with the widespread effects of the global COVID-19 pandemic. The pandemic has underlined that an urgent change of route is needed. It has made it even harder for farmers – already grappling with climate variability and extremes – to sell their harvests, while rising poverty is pushing an increased number of city residents to use food banks, and millions of people require emergency food aid.

FAO calls for sustainable agri-food systems that are capable of nourishing 10 billion people by 2050.

The United Nations Sustainable Development Goal (SDG) 2- Zero Hunger aims to end all forms of malnutrition, including stunting and wasting in children under five years of age by 2030 and address the nutritional needs of adolescent girls, pregnant and lactating women, and older persons.

According to The State of Food Security and Nutrition in the World, 2020 report by FAO, 189.2 million Indians or 14 per cent of the total population in India are undernourished.

Furthermore, 51.4 per cent of women in reproductive age between 15 to 49 years are anaemic in India. The report also states that 34.7 percent of the children aged under five in India are stunted (too short for their age), while 20 per cent suffer from wasting, meaning their weight is too low for their height.

Report underlines the fact that malnourished children have a higher risk of death from common childhood illnesses such as diarrhoea, pneumonia, and malaria.

The National Nutrition Mission that was launched in 2017 to tackle malnutrition set the target of reducing stunting, underweight, and low birth weight, each by 2 per cent per year; and anaemia among young children, adolescents and women each by 3 per cent per year. It also aimed to strive for reducing stunting to 25 per cent by 2022 along with a 2 per cent reduction every year. The mission was renamed POSHAN (Prime Minister’s Overarching Scheme for Holistic Nutrition) Abhiyaan in March 2018.

This year, the POSHAN Abhiyan has been intensified in the form of Mission POSHAN 2.0 and the ‘Saksham Anganwadi’. Anganwadis under the Integrated Child Development Scheme (ICDS), according to the central government, is the largest nutrition supplementation programme in the world. It is implemented in two ways: Take Home Ration (THR) of food supplements for 6-36 months-old children and, on-site Hot Cooked Meals (HCM) for pregnant and lactating women and children aged 3-6 years.

Dipa Sinha, Assistant Professor, Ambedkar University Delhi, tells NDTV that when it comes to food security in India, the problem is not with the availability since we grow enough staples. The problem is distribution, one aspect is Public Distribution and the other is that people are not able to access these due to low wages or unemployment. She explains,

We are lacking at the resources at a household level as well as at the state level, in terms of public support to nutrition. If more jobs are created, if minimum jobs are guaranteed, rices are kept stable, all of this will adds to how much a household is able to keep their family food secure. If all of these are kept stable, families can ensure food security.

“It’s a time to look into the future we need to build together,”says FAO

FAO calls for governments to both repurpose old policies and adopt new ones that foster the sustainable production of affordable nutritious foods and promote farmer participation.

Policies should promote equality and learning, drive innovation, boost rural incomes, offer safety nets to smallholders and build climate resilience. They also need to consider the multiple linkages between areas affecting food systems including education, health, energy, social protection, finance and more, and make solutions fit together. And they need to be backed by a major increase in responsible investment and strong support to reduce negative environmental and social impacts across sectors, particularly the private sector, civil society, researchers and academia.

Our Actions Are Our Future: What Can You Do?

This is where the theme – ‘our actions are our future,’ steps in.

We need to influence what is produced by increasing our demand for sustainably produced nutritious foods, and at the same time be more sustainable in our daily actions, first and foremost by reducing food loss and waste.

We also have the responsibility to spread the word, says FAO, building awareness about the importance of a healthy and sustainable lifestyle. Efforts to mitigate climate change, environmental degradation, and our wellbeing, all depend on it.

India Falls To 101 From 94 In Hunger Index Behind Pakistan, Nepal: Report