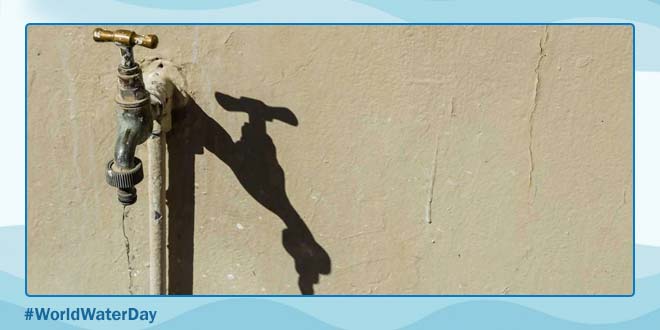 New Delhi: Today it might be South Africa’s Cape Town which is running out of water, but soon it can be one of our own cities like Bengaluru. A 2014 United Nations backed study ranked Bengaluru as second city in the world, which may run out of water by 2019. Rapid urbanisation, drying of lakes, excessive usage of groundwater for consumption and industrial purposes are collectively making Bengaluru dry. Currently this is the reality of Cape Town, the first city in the world on the brink of running out of water, queues outside public water tankers and taps, desperately waiting for one’s daily quota of water and dreading the day when water supply would come to an end. ‘Day Zero’, when the city was expected to completely run out of water was earlier April 16. Now restrictions imposed on water usage has pushed the doomsday by roughly ten weeks to July first week.

Cape Town’s water crisis is partially natural. Some of the natural reservoirs surrounding the city have dried up in the past three decades and consecutive droughts from 2012 to 2017 have only intensified the problem. The city continued to consume water at its regular pace, resulting in the crisis it faces today. In Bengaluru case, the water crisis is largely man-made, courtesy the city’s indiscriminate urbanisation.

Once Upon A Time, A City Of Lakes

Bengaluru was once popularly referred to as the city of lakes with over 300 lakes in the 1970s. Today, the number of lakes in the city stands at around 130, of which 80 are severely polluted and suffer from depleted water levels. How did it come to this for a city which was once known for its large, water laden lakes?

It all started in the late 90s, when the Information Technology (IT) boom hit Bengaluru, transforming the city into a major investor capital within a few years. With the arrival of IT conglomerates, offices and employees arrived as well, gradually taking up vacant spaces in the city. With due encouragement from the state government and civic bodies, new commercial and residential buildings were set up and many lakes were encroached upon. Worse, waste water from the establishments began flowing directly into the lakes, polluting them in the process.

Lakes were Bengaluru’s lifelines once and in merely three decades, they have become highly polluted waterbodies where fires break out frequently. Water from lakes is used indiscriminately by the city’s industries and other establishments, only to be replenished by toxic sewage. The city has lost over 170 lakes in the past thirty years, which should be a matter of concern but sadly, doesn’t seem to be, said Professor T.V. Ramachandra of Indian institute of Science, who has worked on preservation of Bengaluru lakes since 2010.

Water from Bengaluru’s lakes today is not fit for consumption. The Karnataka Urban Water Supply and Drainage Board estimates that in 1970, when the city’s population was just 1.62 million, nearly 15 per cent water supply was dependent on lakes. The Karnataka State Pollution Control Board (KSPCB) report of 2016 stated that water from 90 per cent of city’s lakes is unfit for consumption, making Bengaluru dependent on groundwater and supply from the Cauvery. 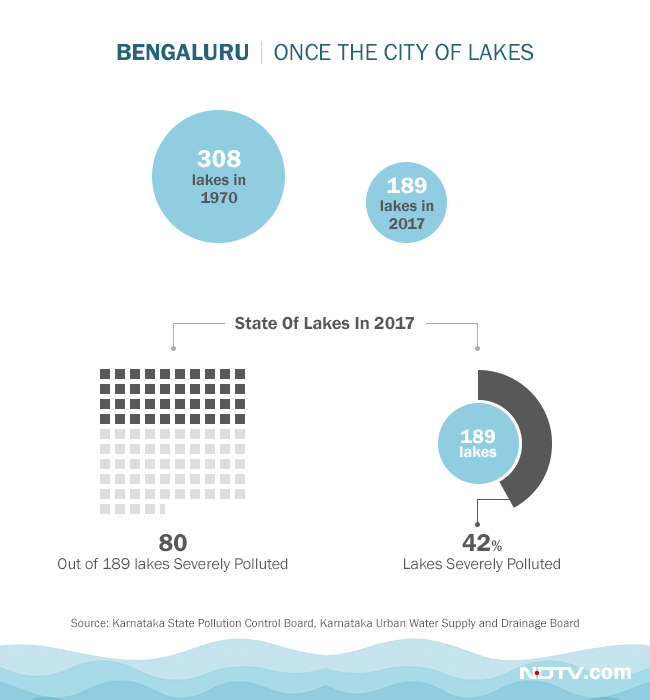 Bengaluru was once adorned with lakes, but rapid urbanisation resulted in their severe encroachment

If Bengaluru’s lakes are over polluted with unclean water, then the city’s inept sewage system is equally responsible. During the city’s rapid urbanisation phase, many buildings were constructed with sewage systems designed to let the sewage water flow underground or into the lakes, both dangerous in terms of water pollution. Sewage kept flowing into groundwater, polluting it gradually.

A 2014 report by the Bengaluru Sewerage Board pointed out that groundwater in 63 per cent of the city’s area has reached levels of severe depletion. Further, many of the remaining areas with non-polluted groundwater are owned by private companies who supply water to several areas around the city. But the reliance on groundwater is proving fatal for the city, as groundwater is not replenished speedily enough in comparison to its rate of usage.

Groundwater is a limited resource and like other urban settlements across India, Bengaluru’s groundwater has been exploited heavily since it became the country’s IT hub. Caught between depleted zones and water cartels today, Bengaluru stares at going dry very soon unless drastic measures are applied, said Jagdish Gowda Sridharma of Water Literacy Foundation, a research think tank working along with the Bruhat Bengaluru Mahanagara Palike on revamping the city’s sewage systems.

Are The Authorities Listening?

Too many cooks spoil the broth is the proverb that best describes the authorities’ handling of Bengaluru’s water crisis. To begin with, the presence of multiple bodies and disagreements between them has hurt the city’s whole system of water supply and lake preservation, and has gradually pushed the city further towards a water crisis. BBMP, Bangalore Water Supply and Sewerage Board, Karnataka Lake Conservation and Development Authority, Karnataka State

Pollution Control Board and the Central Ground Water Board are all in one way or the other responsible for managing Bengaluru’s water.

Individual responsibilities of these bodies often clash with each other, resulting in developmental conflicts. For example, the Karnataka Lake Conservation and Development Authority is in charge of lake conservation and the BBMP is in charge of sewage management, but disagreements between the extent of responsibility lying with both the bodies has resulted in negligence towards lakes like Bellandur and Varthur and their subsequent deterioration in terms of pollution.

We understand the gravity of the water situation in the city and are aware of our responsibilities. We are working on revamping sewage lines and directing them to sewage treatment plants. We are also cleaning the lake Bellandur though the Bengaluru Development Authority is the lake’s custodian. But other bodies are responsible for fixing the city’s water problems and the onus does not fall just on us, said Manjunath Prasad, Commissioner, BBMP.

The Bangalore Water Supply and Sewerage Board (BWSSB) is confident that the city is not running out of water anytime soon, despite the numerous reports indicating a build-up to a crisis. In 2019, the BWSSB will begin work on getting 10,000 million cubic feet of additional water. The body estimates that an increase of population by 8 million from the current 12 million will also not impact the city’s water supply state, as 88 litres of water per day per person will still be available.

We will be able to supply water to the citizens and there is no need to be worried about water supply. Additionally, we have also directed apartments to practice mandatory rainwater harvesting so that the stress on groundwater and lakes is reduced. We are confident of no water crisis in Bengaluru till 2031, said Tushar Girinath, Chairman, Bangalore Water Supply and Sewerage Board.

Water has also become increasingly costly for the consumer, as private water tankers have increased costs by nearly 40 per cent in 2017 to meet the increased demands. A 10,000 litre water tanker load presently costs Rs 1,200, compared to Rs 700 till 2016. The drying up of borewells near the city means water suppliers have to cover more distance in search of groundwater, which increases the price paid by consumers. Water tankers in the city at times supply water for up to 19 hours a day when taps dry up in some of the most densely populated areas. 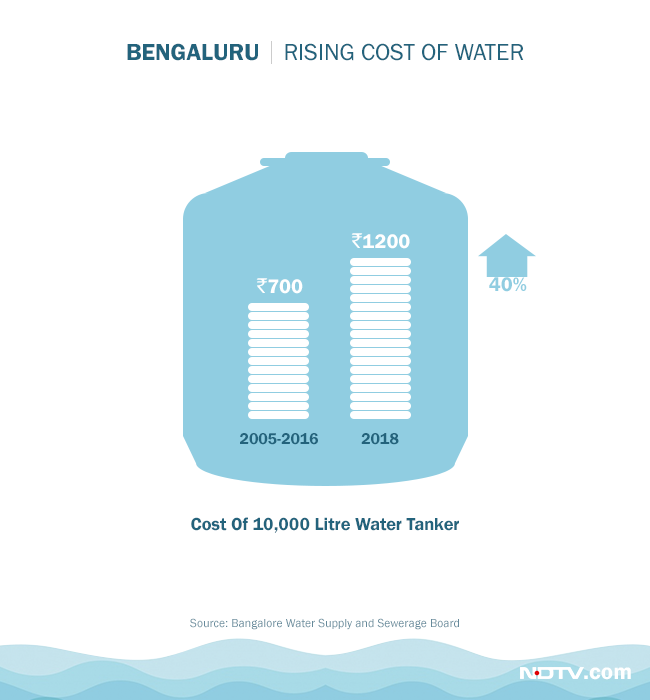 Cost of water has also risen drastically in Bengaluru

Do Citizens Play A Role?

BWSSB’s assurances notwithstanding, there have been several campaigns over the last few years questioning government models in addressing Bengaluru’s water problem. While the BWSSB maybe confident of continued water supply in the city, experts say that given the critical nature of water in the city, supplies may run out earlier than anticipated.

Citizens of Bengaluru, on the other hand, can also do their bit to improve the water situation in the city. Rainwater harvesting, which has been made mandatory in apartments but not individual households, is seen as a major step to conserve water and lessen dependency on groundwater or water from lakes. Harvested rainwater can be used for purposes of washing and sanitation needs, leaving groundwater only for drinking. Rainwater harvesting done on a large scale can also replenish groundwater. More surface water treatment plants will treat sewage for reuse in industrial and commercial purposes, thus lessening the dependency on groundwater.

Rainwater harvesting is an absolute must for Bengaluru at this point. The per capita requirement for the city is 150 litres daily, which the BWSSB has estimated to be reduced to 80 to 90 litres daily in the next few years. This should be seen as a warning sign. Wastage of water should be avoided at all costs in Bengaluru and rainwater harvesting is the best way to ensure that an already overworked groundwater storage is not stressed upon further, said Ritesh Urs from the NGO Right to Water, which has been pioneering for citizens to practice rainwater harvesting and not waste water.

Time, for Bengaluru, is running out fast. Adoption of water conservation policies should be prioritised, before it is too late. As experts put it, being merely dependent on the administration may stall the problem but not solve it. Bangaloreans must adopt techniques like rainwater harvesting to ensure that their city does not run out of water and meet a fate similar to Cape Town’s.

Not A Single Dry Leaf Should Be Burnt In India, Envisions This Pune Women Who Collects Dry Leaves For Composting