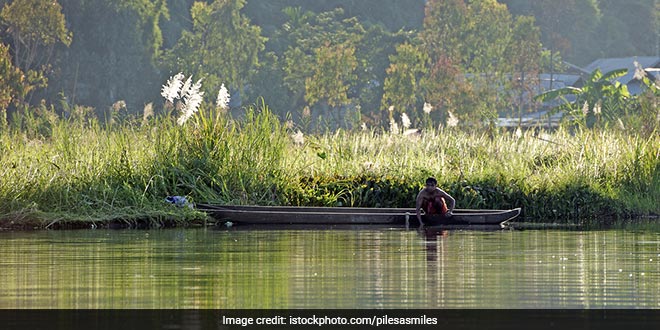 Moirang: Famous for its floating islands and picturesque landscape, the condition of the Loktak Lake in Manipur, one of the largest freshwater bodies in the northeast, is deteriorating, researchers and scientists said. Spread across 300 square kilometres, just 150 short of Mumbai’s expanse of nearly 450 sq km, the lake is also home to the 40 sq km Keibul Lamjao National Park, a thick floating biomass of weed and rice grass, and the endangered Sangai deer.

The main threat to the lake is the waste flowing into it from paddy fields, untreated sewage from Imphal, plastic and degradation of the biomass in the water body.

To save it from inching towards an ICU-like state, an all-women team of scientists aided by a laboratory on a boat are studying and monitoring the health of the lake.

The five-member team of the Institute of Bio Resources and Sustainable Development (IBDS) are working in Loktak under the aegis of the Department of Biotechnology, Ministry of Science and Technology.

Parts of the lake have turned acidic due to excessive levels of phosphate, which could “de-calcify” snails and other organisms such as the shellfish, thus having an overall impact on the ecology of the lake, Director, IBDS, Dinbandhu Sahoo said.

Degradation of phumdis, a thick floating biomass of weeds and rice grass, is also a reason of worry. The lake is known for locals using this floating biomass to form phumdis for residing and even trapping fish.

The lab has all the necessary equipment to measure vital parameters to assess the Loktak’s health, officials said.

Most of the boats in the lake are made by clubbing fiber drums with a wooden plank on it. These do not meet the requirements for conducting experiments. Manufacturing a boat for the lab was also a daunting task due to lack of local expertise, Mr Sahoo said.

It will be wrong to say that Loktak is on ventilator, but yes, it is inching towards being in an ICU state, he said.

Researchers also collect biomass that is taken for testing at the laboratory in Imphal, she said.

Besides this, we also do nitrogen and phosphate tests to check their levels, said Kikku Kinui, another SRF at the institute.

Staff also faces the threat due to insurgency in the northeastern state.

The lake is so huge that collecting samples, which is very vital for knowing its health, could sometimes be precarious.

It is still unsafe to visit some parts of the lake. We are trying to come up with a mechanism where we can have buoys that could collect the samples and give us the data without the scientists actually visiting sensitive sites, Mr Sahoo said.

India Does Not Have Water Shortage, But Lacks Planning In Water Conservation: Union Minister Nitin Gadkari