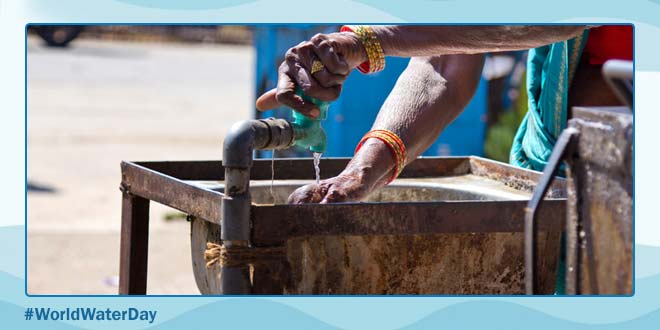 Mumbai: On March 17, 60-year-old Lal Bahadur was beaten to death after he tried to mediate a quarrel between two residents of Wazirpur. The cause of dispute – who will be the first in line to receive water from the private tanker. From the infamous Cauvery river dispute between Tamil Nadu and Karnataka, to northern states fighting over larger share of Yamuna water, looks like World Bank’s prediction of ‘water war’ is gradually becoming a reality in water-stressed areas of India.

Coming back to fatal incident of Delhi, it was reported that residents of Wazirpur claimed the irregular water supply to be the fundamental reason behind tussle. So, then why is Delhi, which according to the Centre For Science And Environment (CSE), has the highest availability of water, record water quarrels, especially around summer every year?

From Chief Minister Arvind Kejriwal claiming water shortage to be a ‘management problem’, almost half of city’s water getting waste in distribution, groundwater depletion to contamination of water leading to serious health problems, the national capital of India seems to be getting entangled in a serious water cycle trap.

Understanding The Water Needs Of Delhi

According to World Health Organisation (WHO), an average person requires 135 litres of water per day. However, when one looks at Delhi an average per capita requirement of water is over 225 litres per capita (lpcd) as per a data given by the Delhi Development Authority.  The national capital is home to about 17 million people and according to census, 80 per cent of the city’s population get piped water supply, while the remaining (living in non-notified slums and unauthorised colonies or JJ clusters) rely on tankers and private tubewells. 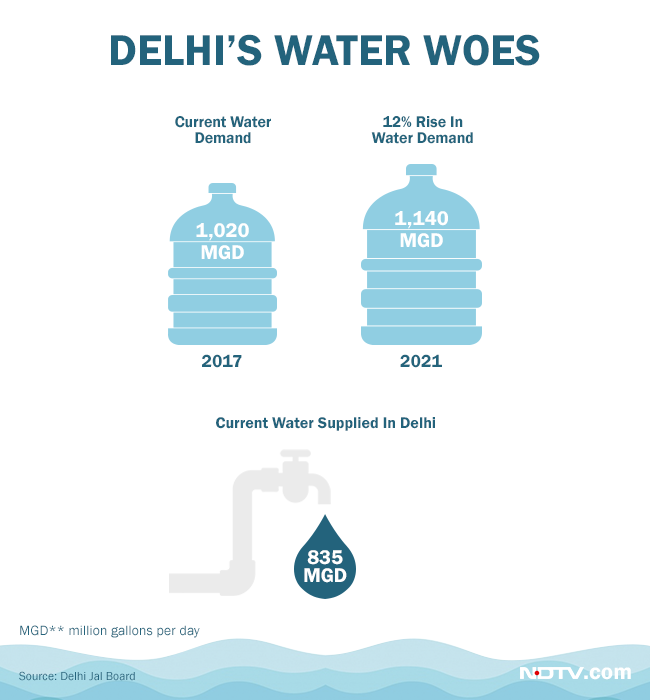 Delhi acquires about 60 per cent of its water from Yamuna and the rest from Ganga Canal and the western Yamuna canal, the Bhakra canal. The Delhi Jal Board (DJB), which is the public water utility in the city, supplies about 906 million gallons per day (MGD) as against the requirement of 1020 MGD. Due to 40% distribution loss, the water consumed in Delhi stands art 835 MGD.

It is projected that in by 2021, Delhi’s water needs will rise to 1,174 million MDG of water per day and with Delhi heavily depending on its neighbouring states for water, experts fear an acute water scarcity.

Presently, Delhi is in a deplorable condition when it comes to water. With Delhi’s increasing water needs, groundwater levels depleting and water quality of Yamuna receding day by day, it will not be surprising if  national capital will have to import water in the near future, says Puneet Srivastav, Policy Manager, WaterAid India.

Inequality And Losses In Water Distribution

“With an average of above 170 litres per capita per day, we are not able to provide even a few hours of water to each household. This means that it is a serious management problem,” chief minister Arvind Kejriwal had slammed the DJB asking them to explain where the water was going in 2017.

Pipe leakages, water theft, unauthorised connections are reasons attributed by the government for the 40% water loss during the distribution. In October 2017, after the chief minister had directed the DJB to curb the water losses, the DJB had installed clamp water metres.

“We have called for companies to bid for temporary flow meters. As per the initial plan, more than 2,000 flow metres will be installed in 600 underground water reservoirs to keep a tab on water losses. Once findings will be out, a plan will be chalked out accordingly,” said a DJB spokesperson. He also stated that most of the losses occur at the stage of the water reaching the houses as pipes break and often the residents fail to repair them.

Delhi Jal Board has taken several steps to minimise leakage losses. To address this problem, a leak detection and investigation (LDI) cell was set up. The Board has replaced 1,200 km of the old, damaged and leaking water mains during the last five years. As a result of these initiatives, the Board expects to bring down the distribution losses to 20 per cent level in the near future, the official said.

The tankers are irregular, and at times they do not even turn up for days together. In such a scenario we have to rely on private tankers and thus shell out extra money, says Sushila Sharma, a resident in one of the JJ clusters.

While some resort to paying hefty amounts, some residents dig up bore wells and extract the groundwater. Over-utilisation of groundwater over the years has led to a massive reduction in groundwater tables.

Contamination In Sources Of Water

Poor quality of drinking water has time and again emerged as one of the major issues in the capital, as the levels of toxins rise in Yamuna and groundwater. It is not unknown that Yamuna, the main source of water is gradually turning into a sewer.

55 per cent of the 15 million people living in Delhi are connected to the sewage treatment plants. However, due to corrosion and clogging in the system many plants do not function at full capacity. As per the Central Pollution Control Board, nearly half of Delhi’s waste water, whooping 1,900 litres directly flows into the river.

“We have to understand that rivers need water to assimilate our waste. Today, Delhi takes water from the river, upstream of Wazirabad, and returns only sewage to it. Between the two barrages — Wazirabad, when the river enters Delhi till Okhla, where it exits Delhi — there is no water. There are only some 17 drains that bring sewage into the river,” said Sunita Narain, Director, CSE.

In last few months, high level of ammonia was found in the water supplied at the water treatment plants in Wazirabad, Chandrawal and Haidarpur couldn’t run on full capacities. Currently, majority areas in South Delhi are facing water cuts way before the onset of summers. This may result in closure of two treatment plants said a press release from DJB a few days ago, further aggravating the water woes.

A 2016 Central Ground Water Board (CGWB) report found that about 49% of the region’s wells have suffered from water-level drops. About 12% of wells deviate from long-term decadal averages by over four metres, indicating major depletion in groundwater levels.

Further the groundwater samples in over 30% of the Delhi were found to be contaminated with high levels of fluoride, “household sewage disposal, drains and urban runoff from innumerable cattle sheds that are littered across the region are some of the depletion causes. There are long-standing issues over high levels of heavy/trace metals and salinity as well,” points out Mr Srivastav.

Additionally, health risks because of declining groundwater quality are being borne primarily by the residents that are outside of DJB’s piped water supply who depend on private tankers or tubewells for regular water supply.

Talking about the contamination, Mr Bhargava said that people often use booster pumps and switch it on before water arrives. This sucks in contaminants and also causes water pressure in the DJB pipelines to drop.

Besides, ill-planned housing projects and an increase in number of private water pumps by households, industries and companies to avoid water shortage have also severely damaged groundwater tables.

Even though Delhi may not be listed in United Nations report of top 10 cities that are likely to run out of water, the ever growing water needs remains a big challenge in the capital. As pointed out earlier, by 2021, Delhi will require 1,174 million MDG of water per day. In addition to the growing population, the incessant migrant influx from neighbouring states of Haryana, Uttar Pradesh and Rajasthan will add to the city’s water burden. Since a large portion of the migrating population is of agricultural labourers, the demand for freshwater and other natural resources will intensify further.

Thus it is necessary that people cut down on their water usage, which in turn will reduce water wastage, and the DJB must also restrict the water supply, “Delhi must stop/minimise wasting half its water in distribution. Delhiites must use less water at home, so that they discharge less waste,” added Ms Narain.

Recycling of waste water and preserving the groundwater tables is another area government needs to work on. Despite encouraging corporates and industrial units to use the recycled waste water, no action has been taken. Policies that incentivise usage of waste water should be introduced, believes Mr Srivastav.

A sustainable policy needs to be designed for rain water harvesting structures, usage of waste water and recharging groundwater that can supplement the water received from Yamuna.

Considering that Delhi’s water distribution loss is two-fold compared to the developing nations, there is an urgent need to bring down the 40% wastage figure. “A separate committee needs to be set up to monitor the water losses. Strict regulations on water theft must be introduced. And most importantly, the government needs to increase the water supply in slum areas in a bid to eliminate the water mafias,” says Mr Srivastav.

With restrain in water consumption, better regulated water policies and improvement in infrastructure, there is no reason why Delhi cannot have a 24×7 supply of clean water and prevent itself from facing acute water scarcity in future.

Adopt These 4Rs To Save Water, A Woman From Hyderabad Shows How